HomeSPORTSMatthew Wade: 'We've given ourselves a chance. We'll hope for a draw...
SPORTS

Matthew Wade: ‘We’ve given ourselves a chance. We’ll hope for a draw or a washout’ 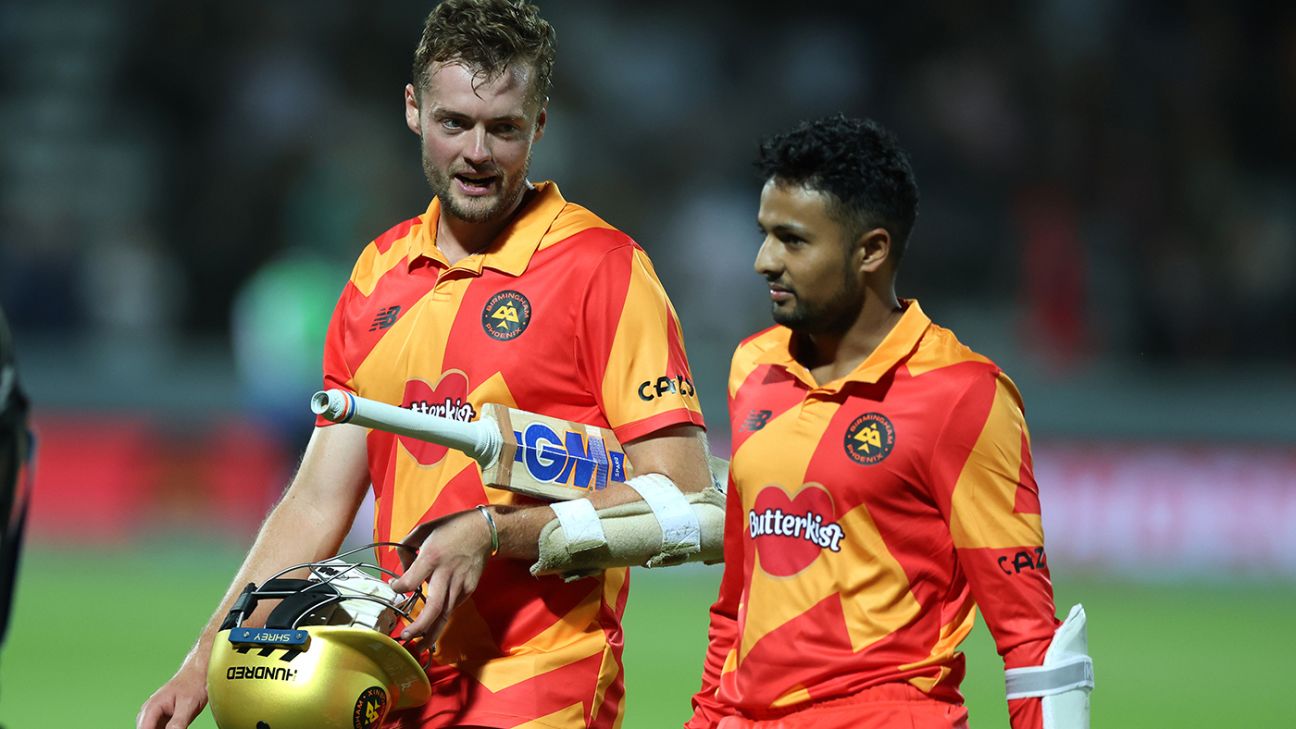 Sit in the pub and pray for rain in Manchester. That, according to Matthew Wade, is Birmingham Phoenix’s plan for the rest of the Hundred, after they were left on the brink of elimination despite completing a one-wicket win against London Spirit at Lord’s on Tuesday night.

Phoenix needed to chase their target of 140 in 73 balls or fewer in order to overtake Spirit on net run rate and seal a spot in the knockout stages. Promoted to No. 3, Wade hit 81 off 42 balls but struggled for support from his team-mates, and Phoenix will only qualify if Manchester Originals tie with Oval Invincibles on Wednesday evening, or if the game finishes as a no-result.

“We won a game of cricket,” Wade said. “We’re five [wins] and three [defeats]. We’ve given ourselves a chance, I suppose you could say. We’ll hope for a draw or a washout and we’ll go through.

“We knew coming in that it was, like, 43 runs or 28 balls to spare that we had to win with. That’s over a quarter of the game, so we knew it was going to be tough. We were hoping that two blokes got going with the bat and we could chase it down but it didn’t happen. So we’ll just go and sit at the pub and watch the game.”

Spirit needed to restrict Phoenix to 103 or fewer to leapfrog Trent Rockets and seal automatic qualification for Saturday’s final and looked in with a chance of doing so when they reduced them to 95 for 7, but will instead play in Friday night’s eliminator.

“That [figure] was always in our mind, especially with early wickets, but Matthew Wade played an excellent innings,” Ravi Bopara, Spirit’s top-scorer, said. “He took it away from us a little bit. It is what it is and at least we’re through to the next round.

“The boys were walking off there and saying ‘what a weird feeling that was’. We were happy because we’ve gone through, but walking off, you’ve lost the game. Weird.”

Wade said that Phoenix’s heavy home defeats against Manchester Originals and Northern Superchargers are likely to be the results that cost them. “We knew after the other night that we’d cost ourselves and it was going to hurt come the back end today,” he said.

“We went out and tried to chase them early. It didn’t happen and we kind of reverted to winning the game. We won a game of cricket and that’s all you can look at. It’s not tonight that was the problem; it was the games when we got blown out of the water at Edgbaston.”

“In Australia, [in the BBL], we have a four-over powerplay and the Power Surge and it just feels like this is a condensed game of T20. It’s a more structured format, I feel. [Games] start a little bit earlier and a lot of kids come in. My kids have had no interest in cricket until I’ve got over here and now they’ve loved it.

“My daughter is collecting Hundred [trading] cards and they’ve just embraced the atmosphere of the Hundred, which is something that has really opened my eyes. Hopefully a lot of countries around the world look at this format because it feels like with the time that it’s played in and the format, it’s something that everyone who comes and has a look at it or plays it seems to fall in love with.”

Wade will briefly return home after the tournament before his focus turns to the T20 World Cup, as Australia prepare to defend the title they won in the UAE last year.

“I’ll sneak home if we don’t qualify and get a few more days at home, which is nice. I’ll get probably eight or ten days at home and then we go to India for three T20s and then back to Australia for six more before the World Cup.

“That’s the game we play at the moment. It’s a truly international game at the moment with all these leagues coming out, and international cricket on top of that. It’s just part of the job. I’ll saddle up and hopefully we can defend the World Cup.”

Matt Roller is an assistant editor at ESPNcricinfo. @mroller98