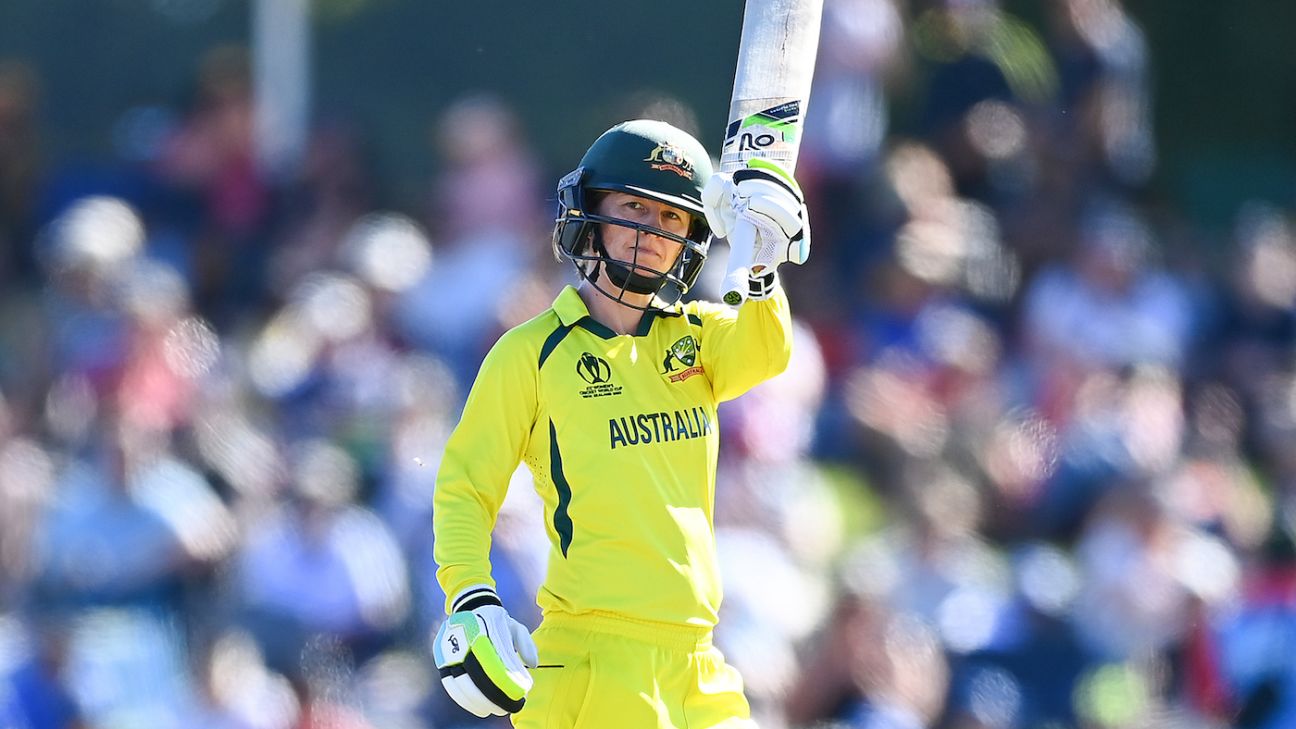 Australia vice-captain Rachael Haynes has announced her retirement from international and state cricket. She will finish her professional career entirely after this season’s WBBL with Sydney Thunder.

Haynes, a left-hand top-order batter, made her Australia debut in an ODI against England at Lord’s in 2009 and a few days later scored 98 on her Test debut at Worcester. In total she scored 3818 international runs with 2585 of them coming in ODIs, which also brought her two centuries.

Haynes’ career can be divided into two parts: up to 2013 and then after her return in 2017. Having been dropped following the 2013 Ashes in England, Haynes was recalled for a tour of New Zealand nearly four years later and from that point averaged 45.07 in ODIs and 33.00 in T20Is with a strike-rate of 126.15. Her final international match was Australia’s gold-medal victory against India at the Commonwealth Games in Birmingham.

Haynes captained Australia on 14 occasions when filling in for Meg Lanning, most notably during the 2017-18 Ashes when Lanning was ruled out with a shoulder injury.

“One of the great things about having a long career is watching those around you develop,” Haynes said. “I’m extremely proud of the way this team has brought players in and nurtured their development. The ability to help players transition smoothly has been instrumental to our team’s success. To be a leader within this environment has been the greatest privilege of my career.”

Haynes filled a variety of batting positions, finishing as an opener in Tests and ODIs – ending her one-day career at the 2022 World Cup where she was the second-highest run-scorer behind Alyssa Healy – and became Australia’s middle-order safety net in T20Is, a role never better exemplified than against Sri Lanka, in Perth, during the 2020 T20 World Cup after Australia’s tournament had been left on a knife-edge following the opening defeat against India.

A Test-match century agonisingly eluded her: apart from her 98 on debut, she also made 87 at Taunton in 2019 (ended by a dubious lbw decision) and 86 in Canberra against England earlier this year.

She had addressed the retirement question over the past year and during the World Cup in New Zealand said: “At the end of every series I play I ask myself the question, ‘do I still have that passion and desire to continue on’ and ‘am I still playing at a level which is contributing to the team’s success?”

On Thursday, she thanked all those who had played a part in her career.

“Playing at this level isn’t possible without the support of many people,” she said. “From clubs, states, coaches, family and friends, I’m so grateful to those who helped me along the way. In particular, I want to thank my parents Ian and Jenni, and partner Leah for their unwavering support.

“To all the team-mates across my career, you are the reason I’ve played as long as I have. You’ve inspired me to be better every day. I’ve learnt something from all of you, on and off the field. You’ve challenged me as a player, helped me grow as a person and most importantly, made cricket fun.”

Healy, who put on 160 with Haynes in the ODI World Cup final earlier this year, paid tribute to her team-mate.

“I feel so fortunate to have been able to spend most of my career playing with Rach,” she said. “In the early years I played against her when she was at Victoria, and we have been rivals in the WBBL, but it’s pretty obvious that it’s better being on her team than trying to get her out.

“To have the privilege of being at the other end watching some of her greatest innings, and it those times, as well as the times off the field travelling around Australia and the world, that I will always cherish.”

Nick Hockley, the Cricket Australia chief executive, said: “On behalf of everyone at Cricket Australia I’d like to congratulate Rachael on an amazing career and also recognise the outstanding contribution she has made off the field.

“Rachael’s calm and assured leadership has played a key role in Australia becoming one of the most successful sporting teams in history. She will go down as a great of the game.

“Rachael has been an inspirational figure for kids coming into the game and to her many teammates and has played an integral part in the advancement of cricket as a sport for women and girls, both here in Australia and around the world. We look forward to watching Rachael in the WBBL this season and hope she maintains a close connection to the game in coming years.”

In the WNCL, where Haynes played for Victoria and New South Wales, she scored 4528 runs at 43.12 with nine centuries. For NSW she sits fourth on the all-time run scoring list behind Alex Blackwell (4788), Lisa Sthalekar (3414) and Lisa Keightly (3081).

Andrew McGlashan is a deputy editor at ESPNcricinfo