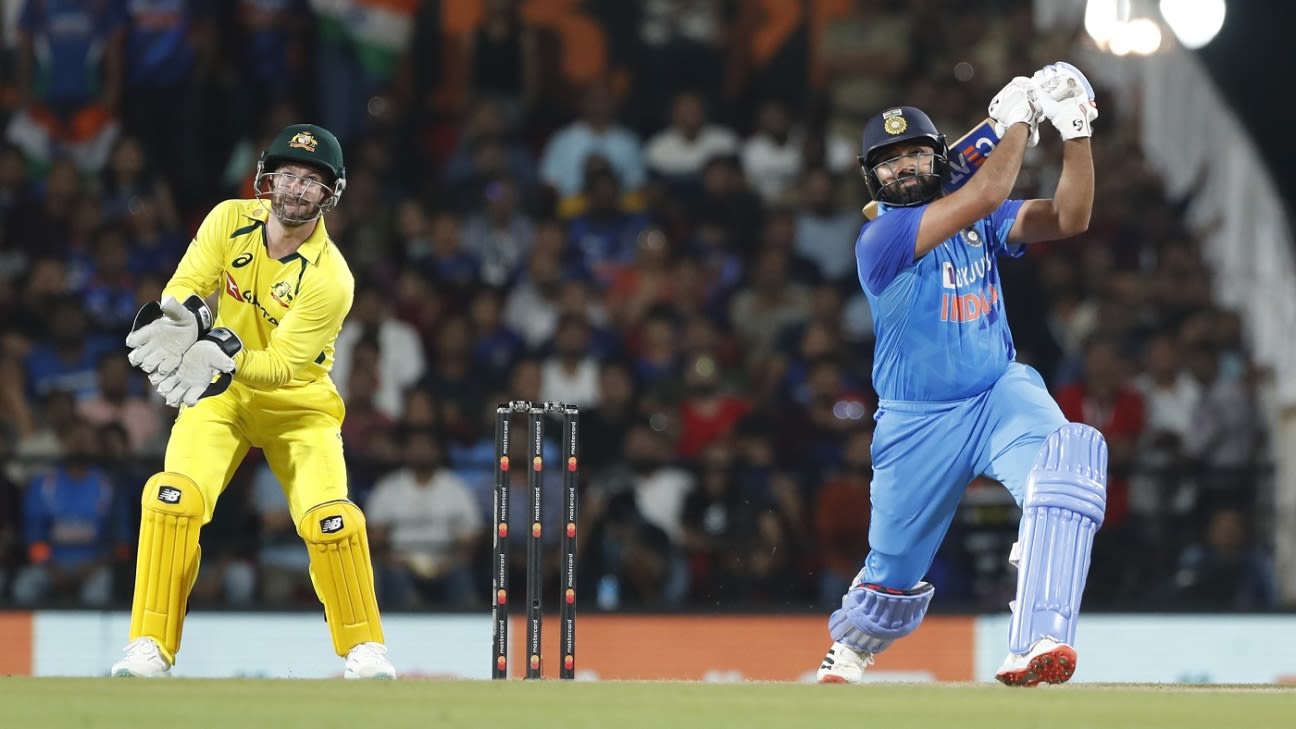 Rohit Sharma smashed four fours and as many sixes in his unbeaten 20-ball 46 to help India overhaul Australia’s 90 for 5 in an eight-over contest in Nagpur. The win meant the series is now levelled 1-1 with the final T20I to be played in Hyderabad on Sunday.

A wet patch in the outfield, thanks to Thursday’s rain, delayed the start by two and half hours. Even when the umpires decided to go ahead, they did so by saying “although the conditions are not perfect, they are safe to play”.

India, bolstered by the return of Jasprit Bumrah, put Australia in after winning the toss. With each bowler allowed up to two overs, they didn’t need a sixth bowling option. So they decided to strengthen their batting, bringing in Rishabh Pant for Bhuvneshwar Kumar.

Aaron Finch‘s 15-ball 31 and Matthew Wade‘s unbeaten 20-ball 43 took the visitors to a competitive total despite Axar Patel conceding only 13 from his two overs. India, however, had the advantage of knowing the target. While Adam Zampa threatened to derail their chase with three quick wickets, Rohit stayed calm to see his side through.

Finch blazes away, Wade ensures strong finish
Hardik Pandya, bowling the first over of the innings, found some movement in the air. But as one would expect in a shortened game, Finch paid little attention to the conditions and scooped the second ball over the keeper’s head for four.

In the second over, Cameron Green was run-out going for a quick single before Axar pinged Glenn Maxwell’s middle stump with an arm ball. The left-arm spinner would do the same to Tim David in his next over to keep Australia in check.

Aaron Finch was knocked over by a searing yorker•Associated Press

Finch managed to hit Yuzvendra Chahal for a straight six in between Axar’s two overs but he had no answer to a searing yorker from Bumrah that flattened his leg stump. In fact, Finch ended up applauding the bowler after the dismissal.

Wade took some time – he was 7 off 7 – before hitting Harshal Patel for two fours in the sixth over. But it was the final over that really lifted Australia as Harshal struggled to get his length right. Wade contributed 18 of the 19 runs scored off the last six balls, pulling two short ones over the leg-side boundary and carving a high full toss over deep cover.

Rohit pulls it off for India
Chasing 91, Rohit and KL Rahul were quick off the blocks. Rohit pulled Josh Hazlewood for two sixes in the opening over and Rahul capped it with a flicked six of his own. In the next over, Rohit hooked Pat Cummins for another six, leaving India needing 62 from six overs.

Zampa pegged them back by picking up three wickets – Rahul and Virat Kohli were bowled, and Suryakumar Yadav was lbw for a first-ball duck. But Rohit found back-to-back fours off Sean Abbott to keep the asking rate under control.

Hardik fell for a run-a-ball 9 but Rohit steered the last ball of the seventh over, bowled by Cummins, behind point. With India requiring nine from the final over, Karthik slogged Daniel Sams behind square leg for six and then pulled a slower short ball between deep midwicket and deep square leg to seal the win.

Hemant Brar is a sub-editor at ESPNcricinfo