HomeSPORTSWill Jacks spearheads Surrey recovery with remarkable 150 not out
SPORTS

Will Jacks spearheads Surrey recovery with remarkable 150 not out 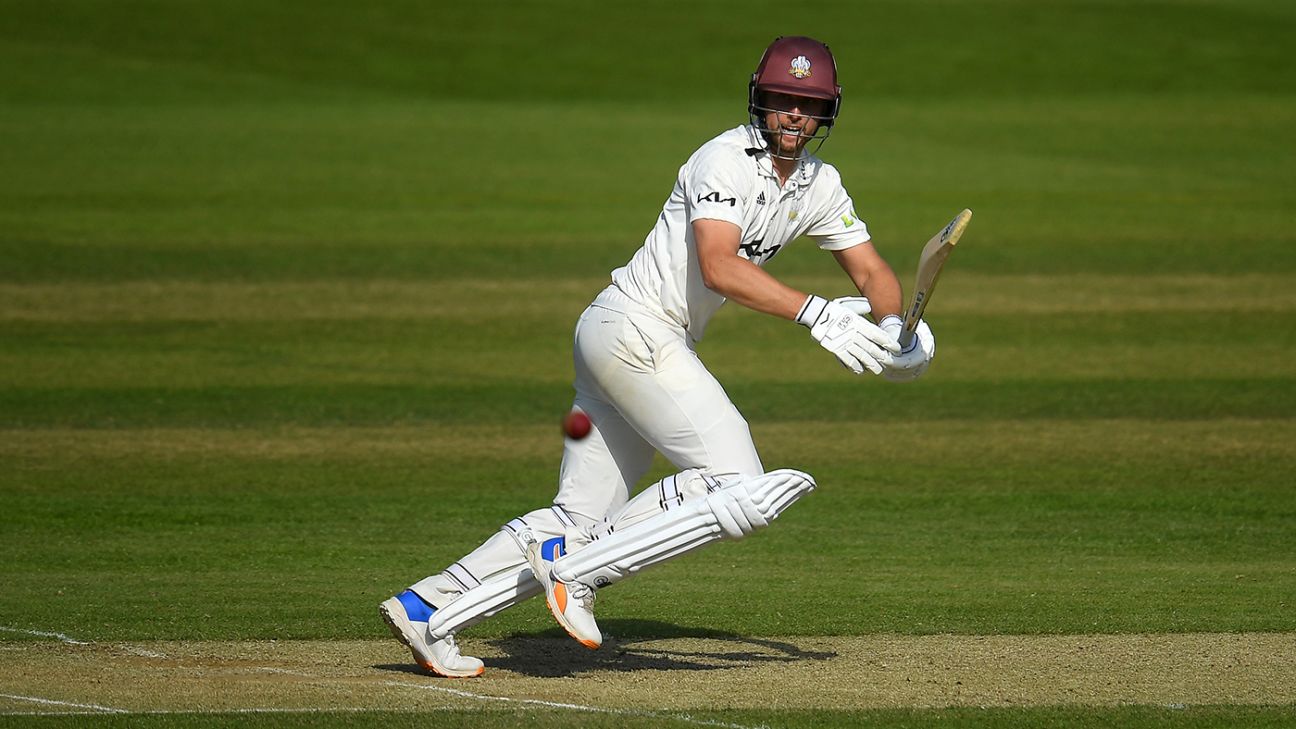 Will Jacks hit eight sixes in a remarkable 150 not out against Essex to spearhead a stunning Surrey recovery on day two of a so far memorable LV= Insurance County Championship match at the Kia Oval.

Jacks, 23, batted with a maturity beyond his years to turn a superb contest on its head as Division One leaders Surrey – 112 for 7 at one stage – reached 319 all out in reply to Essex’s first innings 271.

In six overs’ batting before the close, Essex then lost Alastair Cook and Sam Cook, both for 4, while staggering to 19 for 2 – a deficit still of 29 runs. Dan Worrall, fresh from his first innings 6 for 56, had former England opener Cook caught at the wicket from a ball angled across him and nightwatchman Cook well held at second slip.

Jacks’ spectacular late onslaught will be long remembered at the Oval and included leg spinner Matt Critchley being plundered for 26 in an over and off spinner Simon Harmer 23 more from another. Jacks, having got to three figures, scored his third fifty from just 17 balls with six sixes and three fours.

Coming in at 88 for 4, he took 105 balls for his half-century and 167 balls to reach his third first-class hundred, but this was clearly the best and most eye-catching innings of his burgeoning career. In all Jacks batted for more than four hours, facing 184 balls and hitting 10 fours besides those eight sixes.

But Surrey’s dramatic rally, and Jacks’ tour de force, also owed much to the resilience of the tail, with Tom Lawes, Kemar Roach and last man Worrall featuring in stands of 55, 85 and 67 for the eighth, ninth and tenth wickets.

Roach, in particular, batted with the assurance of a top-order player for his 29 from 92 balls, also negotiating the second new ball with aplomb until he was bowled by a lovely looping off break from Harmer as he pushed defensively forward.

Fast-medium bowler Shane Snater was the pick of Essex’s bowlers with 3 for 35 from 21 overs. He even had figures of 3 for 8 from his first 12 overs, with seven maidens in his first eight overs, and the Essex attack initially combined superbly to put the squeeze on Surrey.

But that was before Jacks, aided by his tailend partners, first guided Surrey towards parity with measured batting and then, once Roach was dismissed, accelerated to go first from 84 to 96 with two legside sixes in three balls off Harmer. Then came six more sixes, three each off Harmer and Critchley from a collection of slog-sweeps, pulls and effortlessly struck shots down the ground that fully showcased Jacks’ power.

It was all so different from the day’s earlier events. Resuming on 24 for 1, Surrey first lost their captain Rory Burns for 24 in the second full over of the morning, leg before trying to whip to mid wicket a ball from Cook, who was bowling around the wicket to the left-hander.

Hashim Amla, beaten twice by Snater but having batted carefully to reach 12, then mishit a pull at Jamie Porter’s medium pace and saw Nick Browne hang on to a diving catch at mid wicket at the second attempt.

Ollie Pope, who hooked Cook for six but was dropped at second slip off Porter on 23, had only gone on to 26 when he lobbed a checked drive at Snater to mid off, where Tom Westley dived forward to take the catch.

And, after lunch, Surrey’s top order continued to find ways to get out against Essex’s disciplined bowling when Ben Foakes (11) limply cut the first ball he faced after the interval, a short one from Snater, straight to cover point.

That left Surrey 95 for 5, and it soon got worse for the home side as Cameron Steel, his feet anchored to the crease, was beaten and bowled off stump for 5 by a fine ball from Snater. Then, aiming an expansive smear through extra cover, Jamie Overton – also on 5 – was undone by a cleverly-flighted off break from Harmer which turned through the gaping gate to hit his stumps.

Jacks, in what proved to be the day’s pivotal moment, had already been dropped low down by Alastair Cook at first slip on 9 off the metronomic Snater, but was clearly determined to make the most of his escape and not give his wicket away and, first with Lawes, he began to rebuild the innings from the depths of 112 for 7.

Lawes, the 19-year-old all-rounder, impressed with fours on driven off Sam Cook, cut fine off Critchley and slog-swept off Harmer, but after reaching 19, he was distraught to loft a drive at Critchley straight to extra cover. Roach, however, dug in alongside Jacks and a wonderful day’s cricket, eventually, belonged to Surrey.