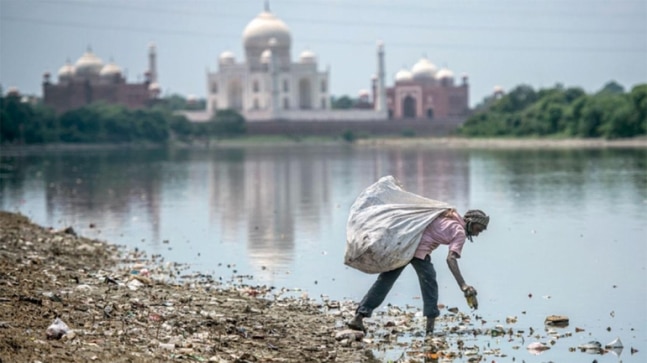 It was meant to be a grand project, showcasing Mughal-era armour, attire, culture and related memorabilia. But take the red sandstone-topped Shilpgram Road to the eastern gate of the Taj Mahal, past the stone plaque bearing the legend ‘Mughal Museum’ and enter the iron gate adjacent to it, and you step into a dream that has long been abandoned.

It was meant to be a grand project, showcasing Mughal-era armour, attire, culture and related memorabilia. But take the red sandstone-topped Shilpgram Road to the eastern gate of the Taj Mahal, past the stone plaque bearing the legend ‘Mughal Museum’ and enter the iron gate adjacent to it, and you step into a dream that has long been abandoned.

The three-storey building on the 5.9-acre campus, 1,300 metres from the Taj’s eastern gate, has been lying unfinished for almost six years now. More than two dozen expensive cassette air-conditioners lie rusting in the open, reinforcing the sense of dystopia. The complex was to have a handicrafts market, a seminar hall and an art gallery. The hall for the handicrafts market is filled with rainwater; bushes have grown around it; the stones and tiles in the seminar hall—now serving as a shelter for stray dogs—have come off in several places.

Presiding over this abandoned landscape is a bright yellow banner fluttering at the gate, announcing the structure’s new name—the Chhatrapati Shivaji Maharaj Museum. And rather than documenting any Mughal splendour, the renamed structure will display the history of the Braj Mandal, where Lord Krishna is believed to have been born and spent his childhood and adolescent years.

Ever since the BJP government took charge in the state, the demand to change the names of the roads, parks, monuments etc. in Agra has increased exponentially; some have already been renamed (see What’s in a Rename?). Former BJP MLA Jagan Prasad Garg has written to the chief minister seeking the renaming of Agra to Agravan. On May 4, deputy chief minister Keshav Prasad Maurya, while inspecting the metro project work, directed the officials to rechristen the Jama Masjid station Mankameshwar, on the suggestion of G.S. Dharmesh, the BJP MLA from Agra Cantt.

The BJP government has also renamed a large number of roads and parks to raise its political capital. The famous Mughal Road in Kamla Nagar is now Maharaja Agrasen Road, since last November. On January 6, just before the 2022 assembly election, the government issued an order to rename Teramauri, the 76-acre state park in Fatehpur Sikri, to Gokula Jat Park, to woo the Jat voters. A life-size statue of Gokula Jat is also being erected here. (In May 1666, the peasant army of Gokula Jat faced the Mughal army in the Battle of Tilpat.) 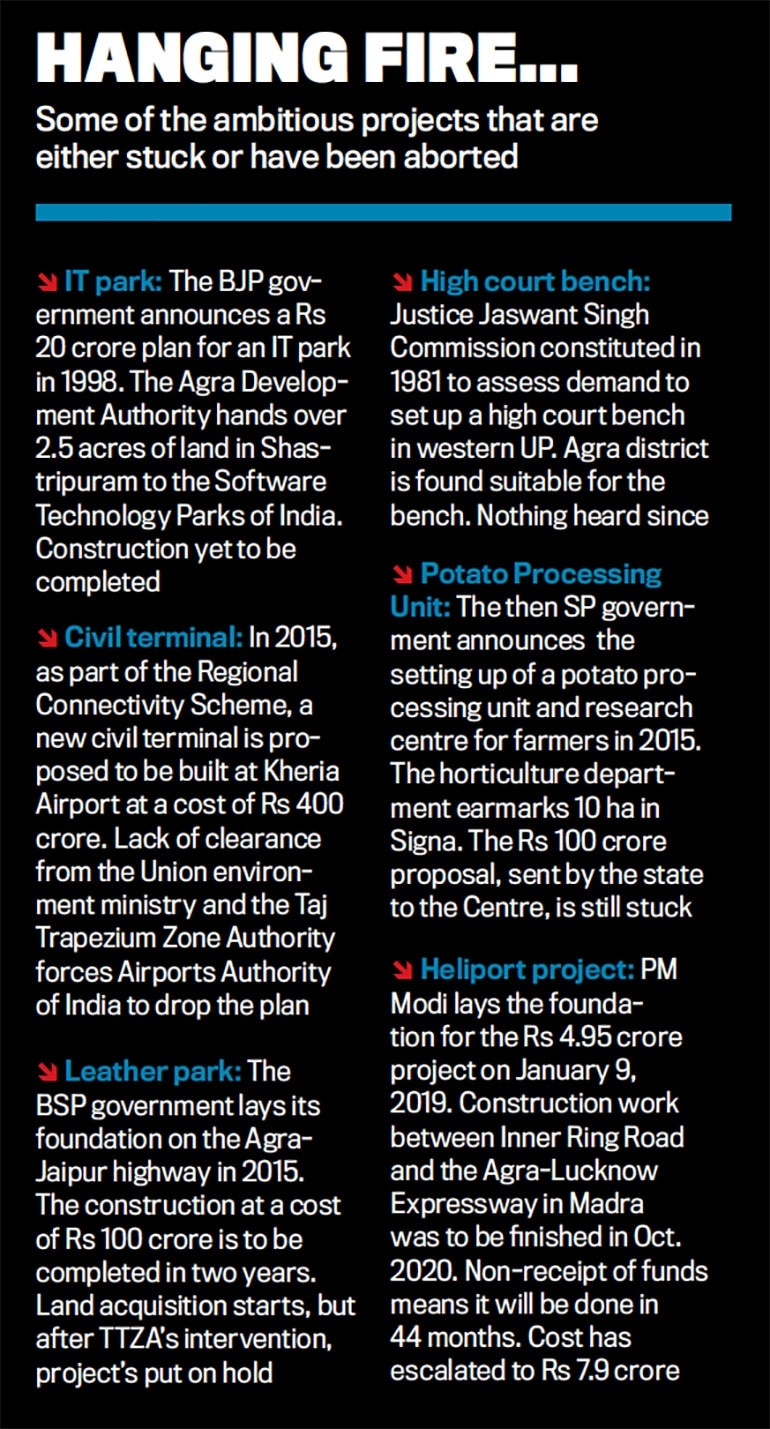 The most controversial, of course, is the campaign to rename the Taj. On August 31, Shobha Ram Rathore, the BJP councillor in the Agra Municipal Corpora­tion, proposed that the marble mausoleum be renamed Tejo Mahalaya. “There are many reasons for it,” he says. “The monument was named so by a foreign traveller. The present name is a distortion of Tejo Mahalaya. The word ‘Mahal’ is not asso­ciated with any cemetery in the world.” However, the motion could not be discussed due to a clash between the BJP and Bahujan Samaj Party councillors in the House. “The proposal will be considered for discussion in the next sitting of the House,” says mayor Naveen Jain, though he admits that renaming the Taj Mahal is outside the jurisdiction of the corporation. Rathore is intent on pushing his proposal again.

“The BJP government,” says Ramji Lal Suman, former national general secretary of the Samajwadi Party (SP), “is targeting the Mughal-era monuments. The government has not done any development work here in the past five years. It has only changed the names of roads, parks and monuments.” For a city that was once the capital of the Mughal empire, and is home to three Unesco World Heritage Sites—the Taj Mahal (which alone draws around eight million visitors annually), the Agra Fort and the Fatehpur Sikri—the renaming spree is nothing but an undisguised attempt to rewrite history. “Instead of giving priority to the works of public interest,” says Shiromani Singh, the only Congress councillor in the corporation, “the corporation has changed the identity of more than 50 roads and crossings in Agra in the past five years by renaming them, but the situation has still not changed.” The unfinished IT Park at Shastripuram; a statue of Maharana Pratap waiting to be unveiled; (Photo: Maneesh Agnihotri)

And nothing symbolises it better than the fate of the Mughal Museum-turned-Chhatrapati Shivaji Maharaj Museum. It was the Akhilesh Yadav-led SP government that had started the construction of the state-of-the-art project—also touted as the state’s biggest—in January 2016 on Power House land. The deadline for the Rs 141-crore project was December 2017. Construction work picked up pace in the first year when the main structure was built with Rs 99 crore. But then just a year later, the leadership in Uttar Pradesh changed, with the Yogi Adityanath-led BJP government taking charge in March 2017.

Later, a denial of funds led to construction coming to a standstill. In September 2020, the government renamed the museum in honour of Chhatrapati Shivaji. However, as an engineer involved in the construction, says, “The name was changed, but the budget for its construction was not released. Because of this, the builder, Tata Projects, quit the work. However, during this period, the cost has escalated to Rs 186 crore.” Deepak Dan, president of the Tourist Guide Welfare Association in Agra, says that they expected a faster completion of the construction work after the renaming, but it did not even resume.

The Yogi government, which returned to power in March 2022, is now mooting a public-private partnership model for the museum. Before that, however, the project will be redesigned. Dilip Singh, the project manager of the Rajkiya Nirman Nigam, the executive body for museum construction, says, “We have sent a letter to the government informing it about the status of the project. The construction will start as soon as the budget is received.”

Not everyone in Agra, though, is happy with the renaming agenda. “The Taj Mahal,” says Rajiv Saxena, vice-president of the Tourism Guild of Agra, “is one of the wonders of the world. It is shameful to do politics in the name of a monument monitored by the Supreme Court and Unesco. This is tarnishing India’s image.” K.C. Jain, Supreme Court advocate and secretary of the Agra Development Foundation, agrees: “In the past five years, the government has not approved a single new hotel in the city, whereas unprovoked disputes are being created over the Taj Mahal. This is adding to the crisis in the tourism industry.” 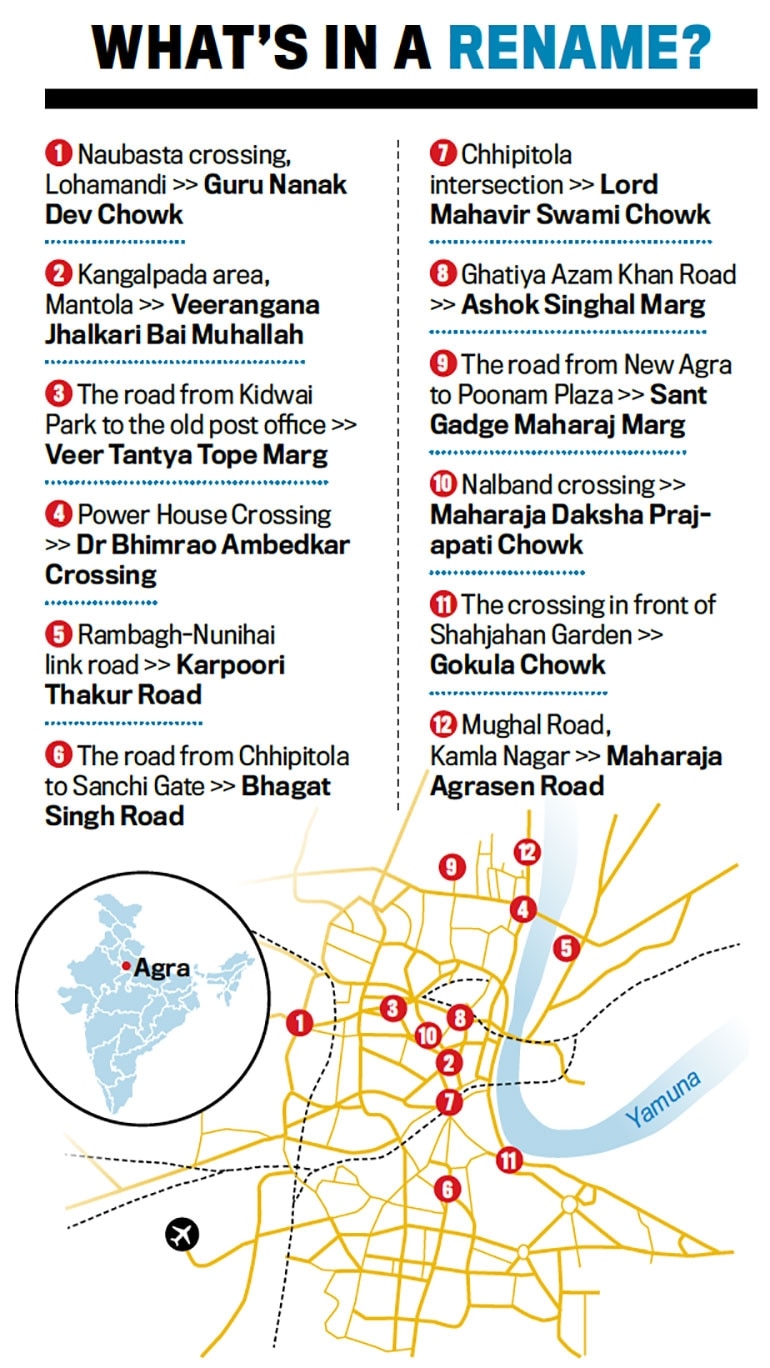 Many development plans have indeed been hanging fire. Among these is the rubber check dam project to conserve the Taj. Chief Minister Yogi had in 2017 announced the construction of a barrage downstream of the Yamuna, 1.5 km from the monument. An official of the irrigation department, who did not want to be identified, says, “For a long time, the project swung between the barrage and the rubber dam before the government agreed to the latter.” A sum of Rs 413 crore was estimated to be spent on the 344-metre-long dam to be built in Nagla Paima village. The government earmarked Rs 50 crore for it in the 2018-19 budget, followed by Rs 6 crore the next year, and Rs 100 crore in 2020-21. So, Rs 156 crore has lapsed as the work couldn’t start. In the current financial year, the government has made a provision of Rs 20 crore for the dam. According to Tarun Sharma, an assistant professor of history at the Dr Bhimrao Ambedkar University in Agra, the Archaeological Survey of India (ASI) has stipulated the water level be 148 metres in the Yamuna behind the Taj Mahal. This would ensure that its foundation continues to get moisture, which is important for the monument’s protection. But the construction is dogged by constant delay, baffling conservationists. In response to an RTI query by environmental activist Debashish Bhattacharya, the irrigation department on August 26 replied that they have got permission to build the dam from the Inland Waterways Authority of India, the Central Water Commission, the ASI and the National Environmental Engineering Research Institute. Earlier in April, the Taj Trapezium Zone Authority—mandated to protect the monument—had consented to the dam. However, the State Environment Impact Assessment Authority has not yet studied the project. This is further delaying permissions from the Union environment ministry and the National Mission for Clean Ganga. Higher education Minister and Agra Southern MLA Yogendra Upadhyay says, “The construction work will start soon. Efforts have been intensified to get NOC from all departments.” He has also requested the chief minister to remove the obstacles in the construction of various other projects. Until that happens development will remain hostage to political imperative.

Zeeshan Akramhttp://tattlecorner.com
Hi, I am Zeeshan. I am the founder and developer of Tattle Corner. I am an ACCA student and a part-time freelancer.
RELATED ARTICLES
INDIA

Teak Smuggling in Madhya Pradesh | Rumble in the jungle

Battle for the bastion in Gujarat