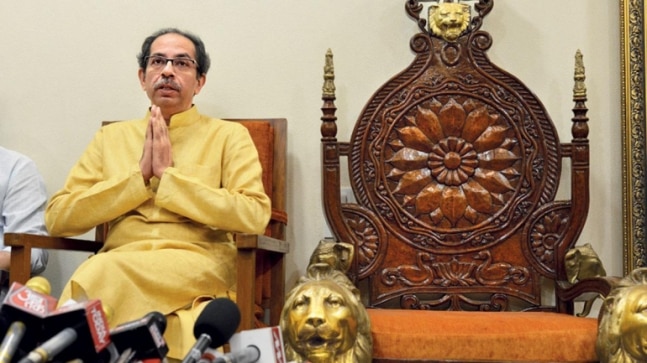 Uddhav Thackeray seems to be a changed man since he lost his seat as Maharashtra chief minister on June 30. In the next 10 days, he visited Shiv Sena Bhavan, the party headquarters in central Mumbai’s Dadar, four times. That may sound like an innocuous factoid, but the number outstrips the count of his visits to the party HQ in the past three years. He has also been add­ressing party officials and elected representatives every alternate day. Uddhav’s sudden proactiveness is no surpise, though. It’s a measure of his keenness to hold on to whatever ground he has under his feet. Specifically, to save his party from going lock, stock and barrel into the hands of Eknath Shinde, the man who upstaged him in a coup and eventually landed the CM’s post.

Uddhav Thackeray seems to be a changed man since he lost his seat as Maharashtra chief minister on June 30. In the next 10 days, he visited Shiv Sena Bhavan, the party headquarters in central Mumbai’s Dadar, four times. That may sound like an innocuous factoid, but the number outstrips the count of his visits to the party HQ in the past three years. He has also been add­ressing party officials and elected representatives every alternate day. Uddhav’s sudden proactiveness is no surpise, though. It’s a measure of his keenness to hold on to whatever ground he has under his feet. Specifically, to save his party from going lock, stock and barrel into the hands of Eknath Shinde, the man who upstaged him in a coup and eventually landed the CM’s post. After Shinde succeeded in splitting the Sena in the legislative assembly, with 40 out of 55 MLAs on his side, the threat is real—and quite existential. An awareness of how desperate the situation is has brought in a tactical nuance not seen during the days of protracted conflict a fortnight ago. That’s why, after the 12 Lok Sabha MPs still loyal to him urged Uddhav to break with the opposition and back BJP candidate Droupadi Murmu for president, the official Sena announced its intent to do so on July 12. The idea is to dial down the mood of unremitting hostility with the rebel camp, and perchance, some say, even reach for a détente with the BJP. With embitterment high on both sides of the Sena divide, it’s difficult to predict a rapprochement with any confidence. But the exigencies driving events are quite dire: there are vital local body elections at stake. And even a conditional return to the right by the Uddhav camp could rewrite Maharashtra’s political equations once again.

Legally, the Shinde group may still lack a formal stamp but, comfortably ensconced in power, it has several advantages. Even within the Sena, the ground is tilted in the new CM’s favour. The lingering disquiet—if not dissent—within the parent was evident when seven out of 19 Lok Sabha MPs bunked a meeting Uddhav had called at his residence on July 11. (That’s when the attendees persuaded him to pick tact over obstinacy.) Shinde has also managed to get the backing of almost all the councillors from the municipal corporations of Thane, Navi Mumbai and Kalyan-Dombivali. When former MP Anandrao Adsul quit all party posts on July 6, expressing anguish against Thackeray and his coterie, it only heightened the sense of an ongoing soil erosion—that Adsul had the Enforcement Directorate knocking on his doors last October will remain a forgotten footnote. Uddhav’s only hope of stanching further blood-loss at present is a petition before the Supreme Court seeking disqualification of Shinde and 15 others for not following the party’s orders. On July 11, the SC said it will form a constitution bench to hear the petition as an immediate hearing was not possible. So the disqualification question could stay in suspended animation for a couple of months, closing the doors on any scope for immediate relief for Uddhav.

There’s still one significant silver lining for Uddhav: the party and cadre’s trust in him. Most Sena office-bearers still back him

This is proving to be a defining crisis in Uddhav’s unusual political career. Does he have what it takes to survive and endure? He does possess an essential ingredient—in contrast to his image as a reluctant politician, Uddhav has always been an ambitious one. In his initial days in the early ’90s, he spent more time on wildlife photography and gave right of way to his more charismatic cousin, Raj. However, after his father and Sena founder Bal Thackeray entrusted him with the responsibility to draw up battle plans for the Brihanmumbai Municipal Corporation (BMC) election in 1997, he gave evidence of the shrewd politician lurking within. Uddhav snatched victory from the Congress in his first-ever outing, and is yet to lose his grip over the BMC. After Balasaheb elevated him as Sena working president in 2003, against the wishes of Raj, Uddhav succeeded in finishing off all his political opponents—till the revolt by Shinde upended his world.

There’s still one significant silver lining for Uddhav: the party and cadre’s trust in him. Barring a few exceptions, no Sena office-bearer has supported Shinde. Almost the entire Shiv Sena national executive—249 out of 256 members—has expressed solidarity with him too. That has given Balasaheb’s son a sense that he can hold on to his patrimony and avert a split in the party organisation. “No one can snatch Shiv Sainiks from the Shiv Sena,” Udd­hav told reporters on July 8. “There is no question of anyone staking claim on our ‘bow and arrow’ (the Sena symbol).” Legal voices say the Shinde faction can lay a claim on the symbol only if the party itself undergoes a vertical split. “The legislative party is different from the political party registered with the Election Commission,” says constitutional expert Ulhas Bapat. “The EC will come into the picture only if there’s a vertical split in the party organisation.”

In the assembly, the Shinde faction has skimmed a grey area in law by claiming it represents the original Shiv Sena. According to the 10th schedule of the Constitution, even if two-third MLAs break from a legislature party, they cannot form a separate group. They have to merge with a political party to keep their membership of the assembly intact. In this case, the decision whether to recognise the Shinde faction as the Shiv Sena lies with speaker Rahul Narwekar. His decision could be challenged in court. The first on-ground battle of supremacy between the two factions will come on August 18, the day when elections to 94 municipal councils are due. Shinde has said he will seek a deferment ‘in view of the monsoon’. However, if the elections are held as per schedule, pundit and commoner alike will be watching curiously to see who gets to hold the bow and arrow. Uddhav has even kept the option of a patch-up with the rebels open, with a rider. “They are welcome but not with the party that has given us only pain,” he told reporters on July 8. He meant the BJP, of course, which he says is on a mission to finish the Shiv Sena and eat up its political space.

Meanwhile, he’s leaving no stone unturned to keep his flock together. Son Aaditya has been visiting party offices in Mumbai to explain the deposed CM’s stand to the cadre. And there is a section receptive to that narrative. Aurangabad mayor Nandkumar Ghodile, for instance, says he will stick with the Thackerays, whatever the odds. “The Sena has stood firm amid every crisis so far. We will overcome this one too.” Sena workers talk of a change in atmosphere at ‘Matoshree’, the Thackeray residence in Bandra East. “Earlier, we had to wait a long time for an audience,” says a worker from Mumbai. “No one even asked if we were hungry. When I visited last week, I was offered snacks and a bottle of water. It was a pleasant surprise.”

CM Shinde, meanwhile, is attempting to impress the common Sainik via “development”, while taking care not to confuse the cadre by directly gunning for the Thackerays. His faction’s petition to speaker Narwekar to disqualify 14 pro-Uddhav MLAs (for ‘disobeying’ Shinde camp chief whip Bharat Gogavale) pointedly omits Aaditya’s name. “We have utmost respect for the Thackeray family. We don’t want Aaditya to lose his assembly membership. He’s the grandson of our deity, Balasaheb,” Shinde told reporters on July 5. At the same time, he’s carefully avoiding the mistakes his predecessor made. Uddhav did not care much for the names advanced by MLAs for government posts, says an NCP leader. “Shinde seems to be keen on approving recommendations by MLAs. That makes a huge impact.” Within a week of taking over, Shinde took two big decisions based on the suggestions of his supporters. He approved the disbursal of Rs 21 crore for the development of Hirkani village in Raigad district, a site of historical significance in Maratha history. He also announced on July 7 that land will be made available at Koregaon in Satara for the Bengaluru-Mumbai Industrial Corridor, something local MLA Mahesh Shinde had demanded.

The CM may have thus won over Sena MLAs from rural constituencies outside Mumbai, but a barrier still remains—that’s the till-now impregnable phalanx formed by the cadre around the Thackerays. And that’s where the game will shift now, close to where Uddhav has dug his trenches. There’s still some fight left in him. Sena MP Vinayak Raut claims the party rank and file is not with Shinde. “Sainiks are emotionally attached to Balasaheb. They can’t imagine the Shiv Sena without a Thackeray.”

Zeeshan Akramhttp://tattlecorner.com
Hi, I am Zeeshan. I am the founder and developer of Tattle Corner. I am an ACCA student and a part-time freelancer.
RELATED ARTICLES
INDIA

Teak Smuggling in Madhya Pradesh | Rumble in the jungle