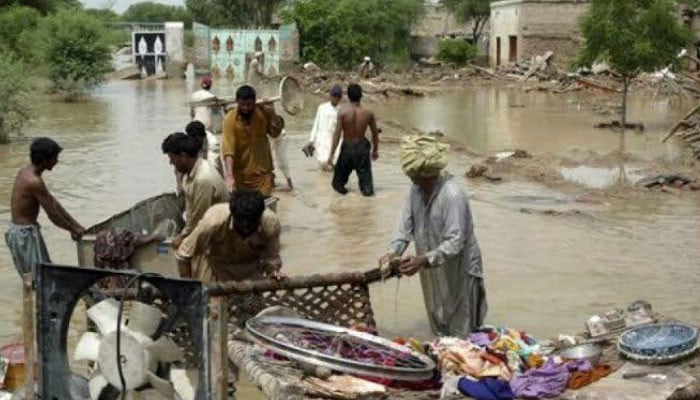 As the flood torrent coming from the Bolan River broke the Sabri Dam, over a hundred villages were feared to be submerged.

The Jadidabad bridge was again swept away in flood water, leaving the Quetta-Taftan National Highway closed. Meanwhile, the flood torrent washed away the gas pipeline in Bibi Nani, suspending the gas supply to Quetta.

Floodwater also raged through areas around Chaman and entered the offices of Customs and the FIA at the Bab-e-Dosti and a village in the Pak-Afghan border area. Many people have been trapped on a road in chest-deep floodwater.

Personnel of the armed forces, including Levies, the FC and the Pak Army, are busy with a rescue operation to take stranded people to safety.

Tents, food and medicines are in short supply owing to fresh torrential rains and flash floods across the province.

Pakistan has urged the international community and philanthropists to help with relief efforts as it struggles to cope with the aftermath of torrential rains that triggered massive floods, killing more than 900 people.

According to the United Nations Office for Coordination of Humanitarian Affairs (OCHA), heavy monsoon rainfall and floods have affected some 2.3 million people in Pakistan since mid-June, destroying at least 95,350 houses and damaging a further 224,100.

Sindh and Balochistan are the two most affected provinces. More than 504,000 livestock have been killed, nearly all of them in Balochistan, while damage to nearly 3,000 km of roads and 129 bridges have impeded movement around flood-affected areas.

July’s national rainfall was almost 200% above average, Sardar Sarfaraz, a senior official at the metrological office told Reuters on Wednesday, making it the wettest July since 1961.

Climate Change Minister Sherry Rehman, in a Twitter post, revealed that over 900 people have died and thousands of people have been displaced due to floods, adding that a “humanitarian crisis” had arisen across the country.

Share
Facebook
Twitter
Pinterest
WhatsApp
Previous articleUK energy prices higher than almost ALL of Europe – state of Britain’s bills crisis MAPPED
Next articleAustralia ODIs talking points: how many allrounders, and who should bat No. 3?