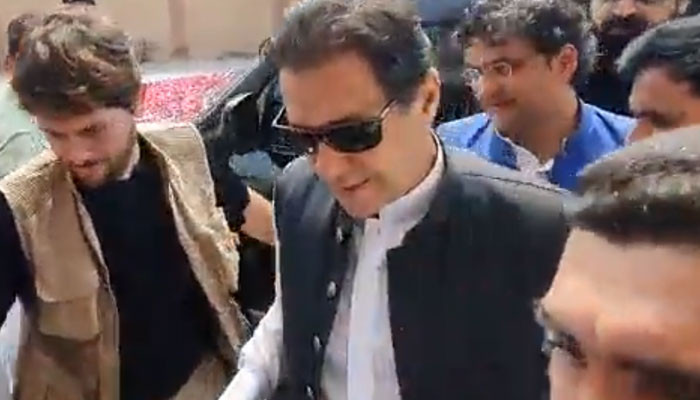 An anti-terrorism court (ATC) in Islamabad granted on Monday an extension in the pre-arrest bail plea of PTI Chairman Imran Khan till September 20, in a terror case for allegedly threatening Additional Sessions Judge Zeba Chaudhry during a public rally in Islamabad on August 20.

Khan was booked in a case under sections of the Anti-Terrorism Act (ACT) for making threatening remarks against an additional sessions judge and senior officials of the Islamabad Police in his speech at a rally.

The party had moved the Islamabad High Court (IHC) to grant Khan transit bail till August 25, but the court had directed the former premier to approach an ATC as it was a terror case.

The FIR registered against Khan states that he threatened Additional Sessions Judge Zeba Chaudhry and police officers at a rally in F-9 Park to “terrorise” police officials and the judiciary.

The main aim was to prevent the police officers and judiciary from carrying out their legal obligations, states the FIR. The FIR was registered on the complaint of Magistrate Ali Javed in Islamabad’s Margalla Police Station under Section 7 of ATA.

“If you had told us this earlier, we would have given permission,” the judge replied and asked if Imran Khan had joined the investigation.

The counsel replied that Khan has joined the investigation via his lawyer. “The IHC has issued a notice on the plea seeking dismissal of the case,” Khan’s lawyer noted and accused the police of misleading the high court claiming that Khan was not cooperating in the investigation.

The former prime minister has not appeared before a joint investigation team (JIT) formed by the Islamabad Police to probe the matter despite three notices.

Meanwhile, the IO informed the court that he received Khan’s statement through a lawyer, at which the PTI chair was asked to appear in person.

“The statement was sent to you but you didn’t make it a part of the case,” judge Raja Jawad Abbas criticised the IO, saying that doing so shows his ill intentions.

The court remarked that the offence in question is a matter related to Imran Khan’s speech.

“Why do you want the accused to appear in person,” it asked.

At this, the assistant prosecutor maintained that they have to interrogate the accused.

“The accused must appear if he has been summoned by the IO,” he said.

The court then adjourned the hearing till 11am, saying that the rest of the arguments will be heard after Imran Khan appears in court.

After a short break during the hearing, the PTI chair appeared before the court amid strict security.

Upon resumption of the hearing, Special Prosecutor Raja Rizwan Abbas informed the court that the petitioner hasn’t joined the investigation as yet despite being served notices thrice.

At this, Khan’s lawyer Babar Awan maintained that the investigation officer (IO) has the former premier’s statement.

He argued that the court can issue a show-cause notice to the IO. He said that the IO will not be tried for it but a summary proceeding will be conducted, for which there is a two-year imprisonment.

“There is no legal value of a statement even if the accused confesses to the crime before the police. Why are they putting the condition of in-person appearance for investigations?” he said.

What did Imran Khan say?

At a rally at the F-9 park in Islamabad, the PTI chair had warned that he would “not spare” Islamabad’s inspector-general, deputy inspector general, and female magistrate, vowing to file cases against them for allegedly torturing PTI leader Shahbaz Gill.

“We will not spare the IG and DIG,” he said while addressing the rally. The former prime minister called out Additional District and Sessions Judge Chaudhry, who had approved Gill’s two-day physical remand at the request of the capital police, and said she, too, should prepare herself as the case will also be registered against her.

The ex-PM led the rally in support of incarcerated leader Gill, who the party claims was subjected to alleged “gruesome torture” in police custody.