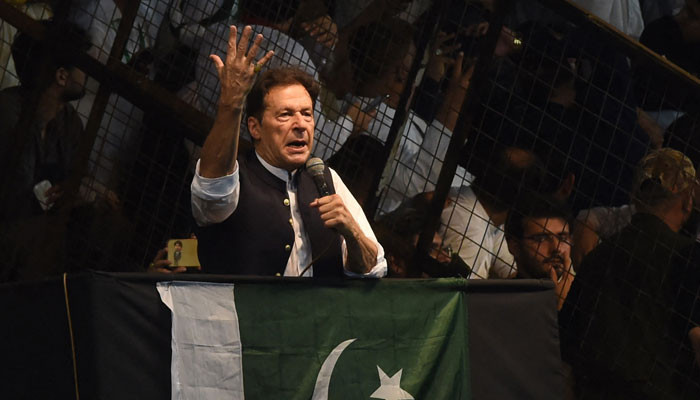 PTI Chairman Imran Khan announced on Friday that he will share the “next critical phase” of his party’s “haqiqi azadi movement” (movement for real freedom) during his Gujranwala rally tomorrow.

“Tomorrow our Gujranwala jalsa will be the last of our present phase of Haqiqi Azadi Movement. I will announce the next critical phase at the jalsa,” tweeted the PTI chairman.

The former prime minister claimed that the incumbent government and “its handlers” are “petrified that nation is standing firmly behind PTI” which is why they are moving on a “minus 1 formula”.

Before Imran Khan’s tweet, PTI leader Fawad Chaudhry in a press conference said that the PTI will launch countrywide protests from tomorrow.

Fawad said that the party’s senior leaders held a meeting today and expressed their confidence in the leadership of Imran Khan.

“There are attempts being made to knock out Imran Khan politically. FIRs are being registered against him at a time when there are floods in the country,” said Fawad, claiming that the incumbent government does not have a “public mandate”.

The former information minister claimed that the government wants to push Imran Khan out of the “political arena”.

“This government is a dummy and real decisions are being made somewhere else. There is only one political party that is in the opposition,” said Fawad, adding that the ECP delayed the elections when there were no floods.

“Keeping in view the political and economic situation, this government cannot be given much time. Pakistan’s politics has also entered the final stages,” claimed Fawad, adding that very soon a government elected by the people will come to power.