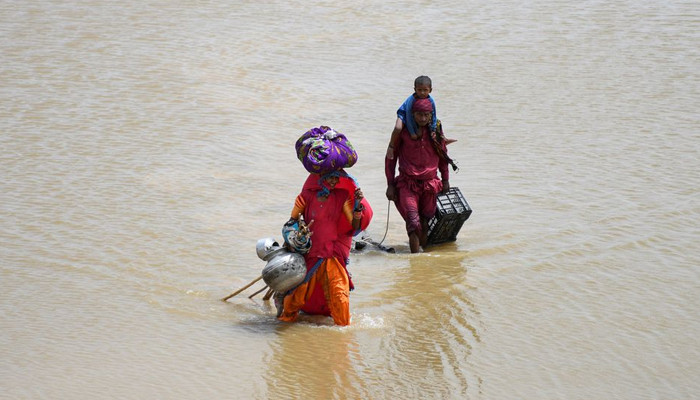 As millions of Pakistanis ravaged by extreme rain-induced flooding awaited relief on Friday, Balochistan and Khyber Pakhtunkhwa came under the spotlight for the sheer scale of devastation witnessed there in a single day.

Balochistan province lost communication with rest of the country after overnight rains.

The destruction of infrastructure and breakdown in communication links added to the difficulties faced by the authorities in rescue and relief efforts in the region.

The air, road and rail networks in Balochistan were already suspended, cutting it off from rest of the country.

“Due to torrential rains and flash floods in Balochistan optical fiber cable, voice and data services have been impacted in Quetta and rest of the main cities of the province,” Pakistan Telecom Authority (PTA) said on Twitter.

Efforts are being made to resolve this unprecedented situation, it added.

Voice and data services were restored later in the afternoon, as announced by the PTA.

A major railway bridge washed away between Kolpur and Mach in Bolan Pass, cutting off Quetta, the capital of Balochistan, from the rest of country for an indefinite period, officials said.

All four highways linking Balochistan with other provinces were blocked because of damaged bridges and landslides.

So far, more than 235 people were killed in province and hundreds of thousands lost their homes, the authorities said.

Hotel swept away in KP’s Swat

Over in Kalam valley of Khyber Pakhtunkhwa’s Swat district, a major hotel was swept away by flood waters in footage that emerged on Friday.

The hotel was located on the bank of the Swat River. It was evacuated timely, and no casualties were reported, according to Geo News. Other hotels near the river were also cleared out following the incident.

Meanwhile, a National Highway Authority (NHA) alert has been issued for tourists for the towns of Bahrain and Kalam in Swat. The alert said that a flood-like situation has developed in the district due to heavy rain.

It said that the Bahrain-Kalam section of the N-95 and N-90 highways have been severely damaged by the downpour.

A spokesperson for the NHA said that flooding has affected the Bahrain bridge as well as the approach road and that aside from the Bahrain-Kalam road, the surrounding tracks have also been impacted.

“Tourists and locals in Swat should avoid unnecessary travel,” the spokesperson said.

The Khyber Pakhtunkhwa government has declared an emergency in Swat after the scale of devastation caused by the flooding.

The state of emergency will be in effect until August 30 for relief efforts in flood-affected areas of Swat, a notification by the KP relief department stated.

KP CM Mahmood Khan has directed the Provincial Disaster Management Authority (PDMA) to expedite relief activities in the area besides timely provision of grocery, cooked food and other items to the affectees.

According to the district administration, communication bridges in Matta, Sukhra, and Lalko in Swat have also been damaged.

A number of hotels and restaurants have been submerged on the Mingora Bypass, and Swat Mingora Bypass Road has been closed for traffic due to inundation.

In Nowshera, meanwhile, public and private schools have been closed for two days due to flooding, the deputy commissioner said.

In a flood advisory issued on Friday, KP’s Provincial Emergency Operations Centre said that water flows in River Swat at Khawazakhela point and its tributaries/nullahs had reached high to very high flood levels — 227,899 cusecs — which “may result in a dangerous situation for communities living nearby”.

The deputy commissioners of Swat, Lower Dir, Malakand, Mohmand, Charsadda, Mardan, Nowshera and Peshawar have been instructed to “immediately identify vulnerable points and communities at risk to devise mitigation and safety measures”.

The PDMA also instructed authorities to evacuate cattle from areas at risk of flooding, as well as restrict vehicle movement there.

Meanwhile, in Sindh, where massive destruction has followed rains, particularly in the rural areas, the federal government will provide a grant of Rs15 billion to overcome the heavy losses of lives and infrastructure, Prime Minister Shehbaz Sharif announced on Friday.

The prime minister said the grant by the federal government would help the Sindh government carry out relief and rehabilitation activities.

He announced the disbursement of Rs25,000 per household through Benazir Income Support Programme (BISP) starting Friday and onwards and said in one week, around Rs28 billion would be given to the affected people.

Also, medical camps are on the alert to extend treatment to patients in the flood-hit areas, he added.

He said Nestle Pakistan had donated 100 tonnes of clean drinking water, of which 80 tonnes and 20 tonnes were to be supplied to the flood victims of Sindh and Balochistan, respectively.

The prime minister mentioned holding a meeting with envoys of various countries this morning, where he urged them to provide assistance to Pakistan in the hour of need.

He mentioned that he talked to the army and naval chiefs who assured full support in carrying out relief and rescue operations.

The prime minister said the grid stations in the flood-hit areas would be again switched on again after taking necessary measures. The power stations, after getting submerged in water, had been turned off keeping in view to avert the incidents of electrocution of people.

He instructed the Federal Minister for Power to remain available in Sindh to oversee the activities.

Chief Minister Murad Ali Shah urged the media to properly highlight the plight of the flood-affected people so as to apprise the international donor agencies about the true picture of devastation.

Foreign Minister Bilawal Bhutto Zardari said the moment was a test for all political parties of Pakistan to help the people of the country in this hour of need.

He thanked the prime minister for his announcement regarding the disbursement of compensation money to flood victims through BISP.

He said presently, tents were the most needed commodity and appealed to the philanthropists to come forward for contribution.

The district administration of Sukkur and the representatives of the Provincial Disaster Management Authority (PDMA) briefed the prime minister about the ongoing work for the relief of the flood-stricken people and the rehabilitation of the infrastructure.

The prime minister was apprised that several flood-hit areas faced unavailability of communication services after severe damage to infrastructure in urban and rural areas.

It was told that 43 food relief camps had been set up in Sindh where the people were being given food and medicines.

The Pakistan Telecommunication Authority (PTA) has introduced a text-to-donate short code 9999 to enable the consumers donate their funds through mobile phone text to support the flood victims.

The consumers would be required to write “fund” and send to the 9999 short code to donate Rs10 to contribute to the relief and rehabilitation activities in the flood-ravaged areas across the country.

The Authority has asked all the cellular network operators to update the National Disaster Management Authority regarding the received donations.

Prime Minister Shehbaz Sharif has also established a PM Flood Relief Fund 2022 where the people can contribute funds to the account No. G-12164.

He said on Twitter on Friday he had met ambassadors and other senior diplomats in Islamabad “as part of efforts to mobilise all resources.”

He said the losses, though yet to be fully documented are comparable to the 2010 flash floods.

“Together we will build back better,” he resolved.

Scale of devastation across Pakistan

Abnormal rains have triggered flash floods and wreaked havoc across Pakistan since June, affecting more than 30 million people, according to climate change minister Sherry Rehman, who called the situation a “climate-induced humanitarian disaster of epic proportions”.

The scale of devastation can be gauged by these numbers released by National Disaster Management Authority.

The death toll from recent rains and floods has reached 937 while 1,343 have been injured.

In the last 24 hours alone, 34 more people died in KP, Sindh, Balochistan, and Punjab, while 50 were injured.

Pakistan has called on the international community to help as it struggles to cope with the aftermath of the torrential rains.

This is a developing story and will be updated. Geo.tv will strive to ensure the timeliness and accuracy of information. Initial facts and figures may be revised as the latest updates are received.