Once again, SC suggests PTI go back to National Assembly 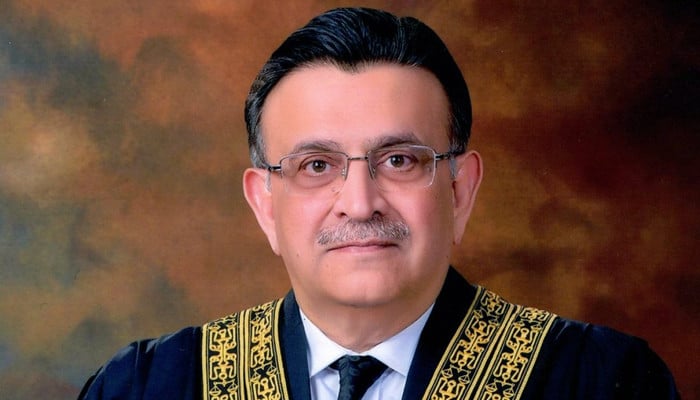 ISLAMABAD: The Supreme Court reiterated on Thursday its suggestion that the PTI should go back and become part of the National Assembly as the public had elected their representatives for a term of five years.

The top court’s suggestion came during a hearing of PTI’s plea against the Islamabad High Court’s (IHC) order of dismissing its appeal of piecemeal acceptance of the party’s MNAs’ resignation.

Chief Justice Umar Ata Bandial — who headed the two-member bench comprising Justice Ayesha Malik — told the party to return to parliament and play its role in the NA.

The top court — during hearings of several cases — has time and again urged the Imran Khan-led party to return to parliament since its ouster from government.

After hearing the arguments, the court adjourned the proceedings for an indefinite period.

Initially, the PTI moved the IHC and challenged the Election Commission of Pakistan’s (ECP) acceptance of the resignations of 11 MNAs and not accepting a “piece-meal” resignation of all 123 lawmakers.

But the IHC dismissed the plea on September 6.

Two days after PTI Chairman Imran Khan was ousted as the prime minister — through a no-confidence motion moved by the then-opposition — all PTI MNAs resigned en masse on April 11.

Suri — who was performing his duties as the acting NA speaker after Asad Qaiser resigned as the speaker — had accepted all the resignations on April 15.

However, once Raja Pervez Ashraf was appointed the speaker, he decided to verify the resignations of all MNAs by interviewing them individually.

The decision was taken after reports that several resignations submitted by the lawmakers were typed and not handwritten — which is against the NA’s rules.

During today’s hearing, the top court said that the IHC has given a clear ruling on the phase-wise acceptance of MNAs’ resignations.

“The speaker has the legal right to accept the resignations of MNAs. Prima facie, if the speaker’s rights are infringed upon, it will attract Article 69,” the court said.

“Convince the court that the high court’s decision had some drawbacks,” it said, telling PTI’s counsel Faisal Chaudhry that the people elected his clients for a term of five years and the party should play its role in parliament.

“Your [PTI] real responsibility is to play your role in parliament. Millions of people have been affected by floods,” the CJP told the counsel, drawing light on the country’s grim situation.

CJP Bandial said that flood affectees do not have water to drink and people from foreign countries were coming to Pakistan to help them.

“You will also have to look at the country’s economic situation. Does the PTI have any idea how much it will cost to hold by-elections on 123 seats?” he asked.

The CJP added that IHC CJ Minallah issued his ruling after deep legal deliberations. “If the court intervenes, it will be difficult for the speaker to do their job.”

The apex court then directed the PTI’s counsel to apprise the bench after taking instructions from the party’s leadership.

CJP Bandial advised the PTI that they should not hurry in their quest to get their resignations accepted.

Justice Ayesha Malik also remarked that lawmakers can approach the court individually. She asked: “In what capacity are you demanding acceptance of resignations in one go?”

Then the CJP asked: “What is your real purpose? If elections are held for 123 seats, what benefit will PTI get from it?”

At this, PTI’s lawyer demanded that the by-elections be held in all 123 constituencies at the same time.

In response to the SC’s remarks, PTI Senior Vice President Fawad Chaudhry claimed that Pakistan’s economy has suffered a loss of billions of dollars due to the “regime change operation”.

The PTI leader was referring to his party’s claim that their government was overthrown by the United States through a “regime change operation”, in which the present government also played a role.

“The Supreme Court asked whether PTI was aware of how much will 123 by-elections cost. Well, the Supreme Court has no idea that as a result of the regime change operation, Pakistan has already lost $5 billion so far in terms of currency alone.”