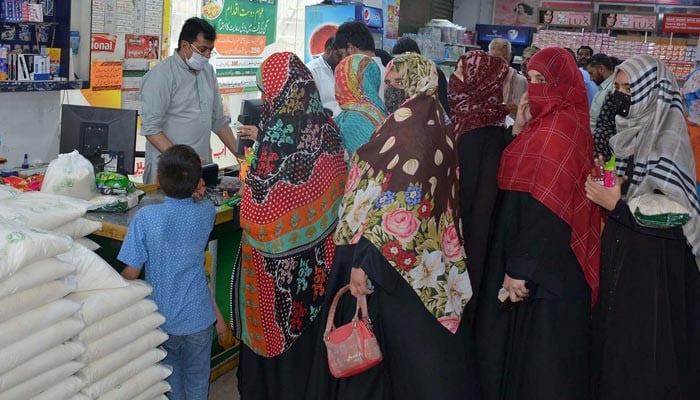 LAHORE: Catastrophic monsoon floods in Pakistan have sent food prices skyrocketing, putting many staples out of the reach of the poor as the cash-strapped nation battles shortages.

The floods have submerged a third of the country, killing more than 1,100 people and affecting over 33 million.

Recovery could cost more than $10 billion, according to the planning minister.

The rains — which began in June, and whose unusual intensity has been blamed on climate change — have also damaged vast swathes of rich agricultural land and crops.

Parts of the mountainous north and breadbasket south have been cut off because roads and bridges have been washed away.

“Things are so expensive because of this flood that we can’t buy anything,” said Zahida Bibi, who had come to a market in the central city of Lahore to get vegetables for dinner.

She told AFP she had to forego some items on her shopping list because inflation had put them out of reach.

“What can we do? We don’t make enough money to buy things at such high prices.”

Onions and tomatoes — common ingredients in most Pakistani meals — have been affected the most.

The prices of both had increased by 40%, the Pakistan Bureau of Statistics said Friday.

But on Monday, Minister for Finance Miftah Ismail said the price of onions had shot up by more than five times, and that the government was trying to quickly implement policies to stabilise food prices — including importing from arch-rival India.

“We need to consider getting some vegetables over the land border,” he told broadcaster Geo News.

“We have to do it because of the kind of prices and shortages we are experiencing… Inflation has broken people’s backs.”

With millions of acres of farmland still under water and certain roads inaccessible, prices are expected to climb further.

“About 80% of the tomato crop in Pakistan has been damaged in the floods, and onion supply has been badly hit as well,” Shahzad Cheema, secretary of the Lahore Market Committee, told AFP.

“These are basic items, and ultimately it is the average buyer who will be most affected.”

Vegetable seller Muhammad Owais at a market in Lahore was struggling to find buyers at the current high prices.

“Prices have increased so much because of (the flood) that many customers leave without buying anything,” he told AFP.

Pakistan was struggling with record high inflation even before the floods, because of rising global oil prices and a balance of payments crisis.

The government found some room to manoeuvre Monday when the International Monetary Fund approved the resumption of a massive loan programme for Pakistan, releasing $1.1 billion immediately.