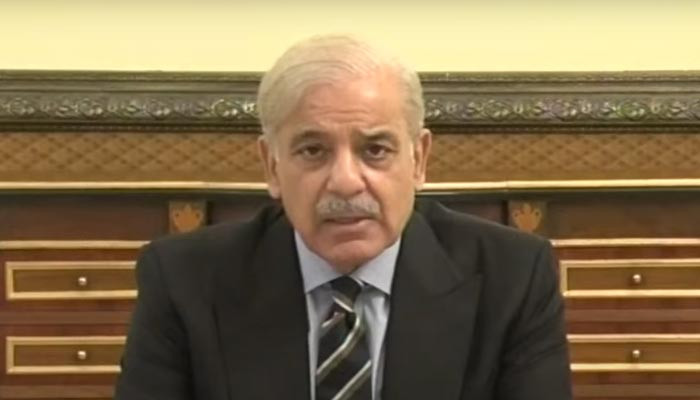 Prime Minister Shehbaz Sharif addresses the nation to announce the petrol prices for the next fortnight on July 14, 2022. — Youtube Screengrab

ISLAMABAD: Prime Minister Shehbaz Sharif Thursday slashed the price of petrol by Rs18.50 per liter to provide maximum relief to the consumers.

Addressing the nation, the premier said that the government had increased the price of petrol after coming into power to meet the conditions laid forth by the International Monetary Fund (IMF), which were agreed by the previous PTI-led government.

However, as the prices are declining in the international market now, the government has decided to pass on the relief to people and, therefore, has decided to reduce the price of petrol and diesel by Rs18.50 and Rs40.54 per liter, respectively.

The new price of petrol will be Rs230.24 per liter while diesel will be available at Rs236 per liter. Meanwhile, the petroleum levy has not been increased on all petroleum products.

The premier further added that the previous PTI government, during its final few weeks, had slashed fuel prices even though the government’s coffers were empty. “This was done so our [coalition] government would fall into difficulties.”

Acknowledging that the decision to increase the price of petroleum products had burdened the underprivileged segment of society, he said: “We had no other way. We had to take tough measures.”

“However, today with God’s blessing, oil prices are declining in international markets and it is by His mercy that we have had the chance to reduce the prices today,” he added.

Commenting on the staff-level agreement with the IMF, PM Shehbaz appreciated Finance Minister Miftah Ismail and his team for playing a part in reviving the loan facility with the global lender but hoped that the current deal would be the last one. “After this, we will try to stand on our own feet.”

The prime minister said that the path ahead could be “thorny and difficult” but in the end, he said, “I reassure you that good times will come soon.”

Following the announcement by the premier, the finance minister said: “PM has just announced a reduction in the prices of petrol of Rs 18.5 per liter [and] in diesel of Rs 40.54 per liter.”

— With additional input from Khalid Mustafa