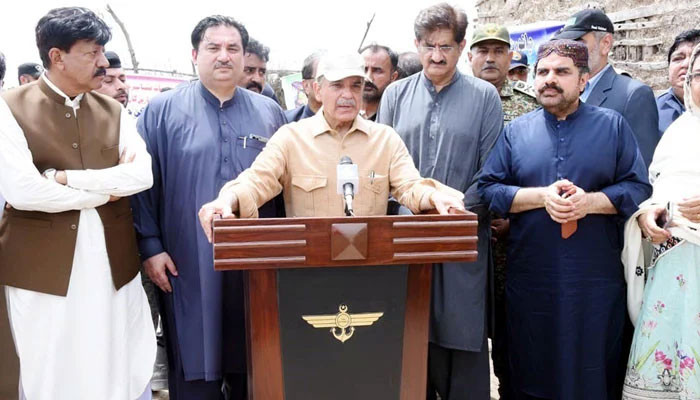 Self-centred politics can cause irreparable damage to Pakistan as unfortunately, a party is playing politics over the agreement with the International Monetary Fund (IMF) when the lender’s board meeting is around the corner, Prime Minister Shehbaz Sharif said, without naming the PTI.

“I have never seen such self-centered politics; it will be a huge injustice with Pakistan and a big conspiracy against the country,” the premier said while referring to PTI on his visit to the flood victims in Sujawl, Sindh.

PM Shehbaz said that the federal government had allocated Rs38 billion in grant to support the flood-affected families with the disbursement of Rs25,000 to each of them.

Speaking to the flood victims, the prime minister said he had already announced Rs15 billion in grant to Sindh while the distribution of flood relief amount among the affected families had commenced in the province after Balochistan under the Benazir Income Support Programme (BISP). “The BISP has complete data, ensuring prompt and fair distribution among the deserving families,” he added.

Assuring the provincial governments of the federal government’s support, the prime minister said other provinces would also be provided with grants. The prime minister was accompanied by Sindh Chief Minister Syed Murad Ali Shah, federal ministers and relevant authorities.

The prime minister said the federal government had continued it efforts to support the provincial governments in rescue, relief and rehabilitation efforts with the support of the National Disaster Management Authority and other relevant departments. “A survey will be launched soon to assess the damages and losses caused by floods across the country,” he added.

The prime minister stressed that in the hour of trial, they had to work collectively, instead of playing politics.

The prime minister said that they would have to devote themselves to the country and the nation and urged industrialists and businessmen to come forward and support people suffering from the impacts of rainfall and floods. He said it was time to seek Allah Almighty’s mercy.

“In Swat and Kalam, flash floods have caused colossal losses as hotels have been swept away and scores of lives were lost,” he maintained. The prime minister also directed Minister for Energy Khurram Dastagir to supervise efforts for restoration of power supply to affected areas.

According to an announcement by the federal finance ministry, Finance Minister Miftah Ismail and officials of the ministry gave an explanation to the IMF, reported Geo News.

The KP government had refused to comply with the requirement of the IMF before the final agreement. KP Minister for Finance Taimur Saleem Jhagra had written a letter to Federal Finance Minister Miftah Ismail, saying that the province could not leave a surplus budget as desired by the IMF. Miftah Ismail had expressed outrage at the letter.