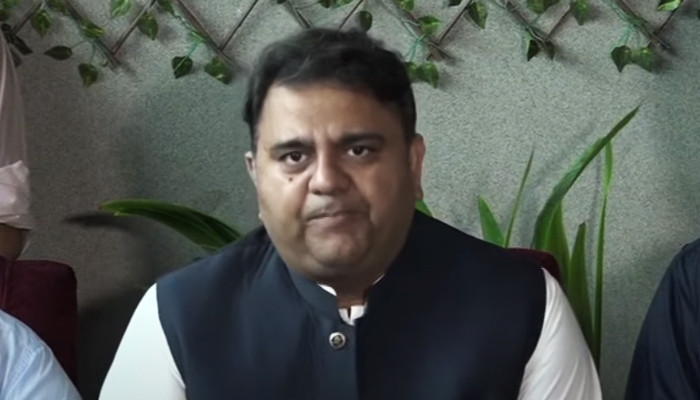 “The history of Supreme Court decisions in Pakistan has not been that bright,” PTI leader Fawad Chaudhry said in a press conference on Thursday after the apex court, in a detailed judgment, noted that the SC was not satisfied as insufficient evidence had been presented to support PTI’s claim of foreign interference.

Chaudhry claimed that the PTI had urged the apex court to investigate the matter and submitted documents related to the “cipher” to the court, but the SC turned down the request and asked the party to not “speak on the cipher in detail”.

The PTI leader said the SC judgment states that there wasn’t enough material to back the foreign conspiracy theory as “the court did not even bother to look at the evidence”.

In the detailed judgment, the court noted that no inquiry was ordered into the matter to ascertain the nature or extent of involvement of any person in Pakistan to seek or receive the support of a foreign state to move the no-confidence motion.

“The reservation on the part of the NSC to recommend stronger measures against the alleged foreign conspiracy probably reflects the inadequacy of the material to take more assertive action. This perhaps also explains the lackluster response by the PCS and the members of the treasury in their respective meeting and sitting of 31.03.2022.”

Moreover, the PTI leader claimed that people are aware of why the SC “did not want to investigate the cipher” as once the probe of the alleged conspiracy begins, then a conversation — that “they want to avoid” — will take place.

The PTI and party chairman Imran Khan has repeatedly blamed a United States-backed conspiracy that led to their government’s ouster on April 11 — and eventually led to the formation of the coalition government.

Chaudhry said that the justices should have “read the cipher” before penning the judgment and added that once the PTI comes back into power, it will quash the order through Parliament.

“Right now, the assembly is occupied, but once the PTI forms government with ⅔ majority, we will quash this judgment through the National Assembly,” the PTI leader said.

Commenting on Justice Mazahar Alam Khan Miankhel’s additional note, Chaudhry said that “if we begin to pursue cases under article 6, we will find there are more people to hang than there are nooses”.

In his additional note, the justice observed that President Arif Alvi, then PM Khan, then NA speaker Asad Qaiser, ex-deputy speaker, and former law minister Chaudhry had violated their authority.

“Whether these acts attract Article 6 of the Constitution (high treason) is also left open to be determined by the parliamentarians to ponder whether they should leave open the doors to such unconstitutional acts or take suitable measures to stop such a mess in future,” he had suggested.

Reacting to the judgment, Prime Minister Shehbaz Sharif said that the detailed judgment issued by the SC on the vote of no-confidence has “exposed the lies and propaganda” by Imran Khan and his party leaders.

In a post on Twitter, he termed it “utterly shameful” how the former premier tried to undermine the Constitution and “fabricated the narrative of regime change”.

In their press conference, federal ministers Azam Nazeer Tarar and Qamar Zaman Kaira welcomed the judgment and said that the SC’s ruling will be remembered as “a shining example” in the history of democracy.

“The court has proved that it will give an order when the Constitution is violated,” the law minister said, noting that the court’s ruling was the “last nail in the coffin of Khan’s foreign conspiracy claim”.

He said the SC, however, has left it to the discretion of the government and Parliament to pursue the case under Article 6 — which pertains to treason.