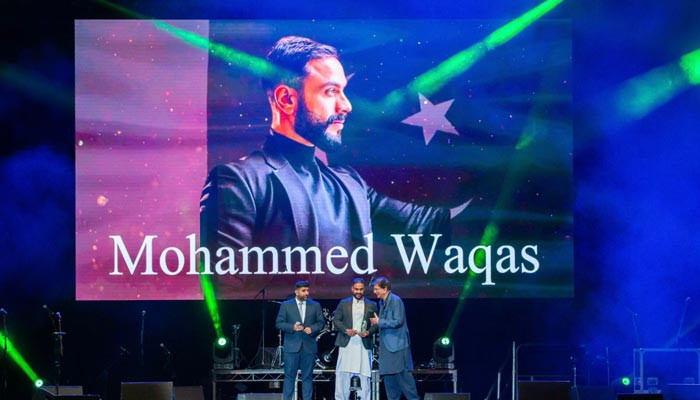 LONDON: Leading businessman Mohammed Waqaas won the “Most Successful Business Person of The Year Award 2022” at the Pakistan Achievement Awards ceremony held at the Wembley Arena – where former prime minister Imran Khan also spoke to over 8,000 people who attended the event.

Waqaas, who is managing director of Royal Nawaab Restaurants in London and Manchester, received the prestigious award for his services to the Asian restaurant industry in Britain.

The award was given to Waqaas for creating hundreds of jobs and introducing authentic Pakistani cuisines to a large section of the British population through his food establishments.

The recitation noted that Waqaas opened up his kitchens during the COVID lockdown and provided thousands of meals for free to local hospital staff and emergency workers who risked their lives to provide safety and food to the vulnerable people.

At the same event, “Lifetime Achievement Award in Restaurant Industry 2022” was given to Waqaas’s father Mahboob Hussain who founded the first Royal Nawaab restaurant several years after coming to Britain from Gujar Khan as a labourer. The recitation noted that Hussain had served the Asian food industry and was amongst the pioneers of the British Curry industry.

Commenting on winning the award, Waqaas said: “It is with great pride that I accept this award, which is in recognition of our dedicated staff across all branches who have contributed their efforts and led us to win this prestigious award. We have always aimed to serve the local communities. We are an ethical business and our primary focus is to give back to the local communities who are vital to our success.

“We are amongst a few biggest Asian restaurants with a daily footfall crossing around 20,000 every day. We have a social duty to perform too and that is the reason why we opened up our doors to help the emergency staff during the height of the COVID pandemic. We worked with the emergency staff and charities to help others through our infrastructure to demonstrate that Asians and Pakistanis care about the country which has provided them so many opportunities.”

This was the first ever and the biggest Pakistani event ever held at the venue to celebrate Pakistan’s Diamond Jubilee celebrations.

Earlier, former premier Imran Khan welcomed the audience at the Wembley Arena in his video address and thanked them for supporting him after the “regime change”.

Imran Khan told the audience that he was ousted to bring in “slaves” to rule Pakistan. He said India was a strategic ally of the USA and it was buying cheap oil from Russia but Pakistan was not allowed to do so. The PTI chairperson said that the “War on Terror” was someone else’s war but over 80,000 Pakistanis were killed during the war.

Pakistan is being punished, said Khan, for attempting to forge an independent foreign policy.

Khan told the audience he was campaigning for Pakistan’s “Haqeeqi Azadi” because Pakistan has never been free in 75 years in real terms. He said his struggle was for a welfare Islamic state where justice and merit prevailed and where principles of meritocracy and Allama Iqbal’s vision prevailed. He said various governments and leaders had failed to build such a Pakistan because always an easy path was taken which was directed by the foreign aid and slavery of the west.