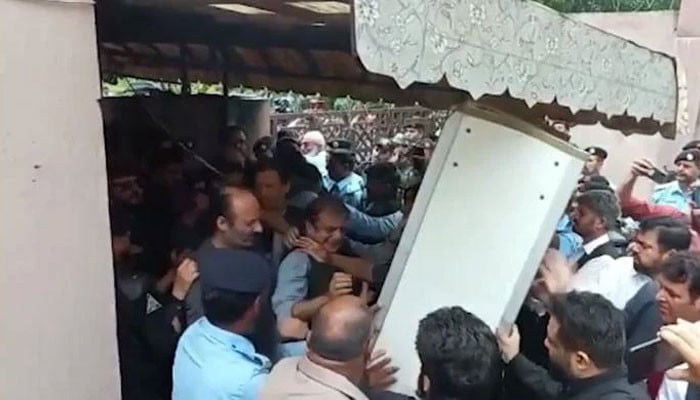 A security walk-through gate at the Federal Judicial Complex in Islamabad was uprooted on Thursday as a charged crowd surrounded PTI Chairman Imran Khan when he arrived to seek a pre-arrest bail in a terror case.

A video of Imran Khan’s arrival surfaced soon after he appeared in the ATC, in which he and other PTI leaders including former information technology minister Shibli Faraz were seen being pushed badly by the crowd.

As people stormed through, the security walk-through gate was pulled off the ground.

Imran Khan secured pre-arrest bail in the terror case filed against him for threatening Additional Sessions Judge Zeba Chaudhry during a public rally, shortly after he appeared before the ATC.

The ATC accepted the ex-prime minister’s bail plea against a surety of Rs100,000, stopping the police from arresting him till September 1. The court also issued notices to the police and petitioner. Khan’s bail will be reviewed now at the hearing on September 1.

Khan appeared in the ATC in person where judge Raja Jawwad Abbas heard his plea.