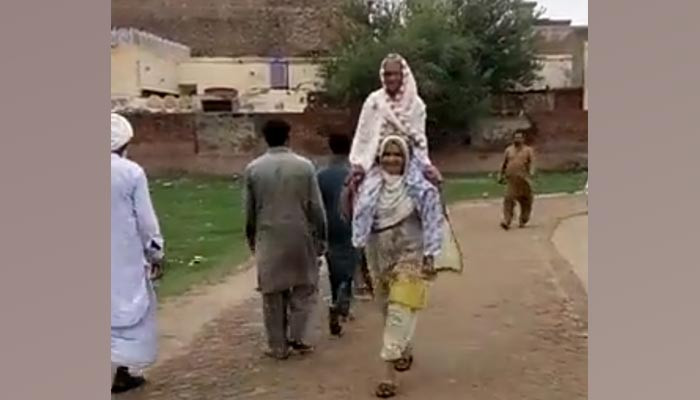 Undeterred citizens across all age groups, despite challenges to their mobility, seemed eager to cast a vote during the much-anticipated and ongoing by-polls in the 20 controversial constituencies of Punjab.

Several videos and pictures were shared on social media where people can be seen coming out to cast votes despite all odds.

Among these was a heartening video of a woman taking her mother to a polling station on her shoulders in a piggyback ride.

A picture of a wheelchair-bound PTI supporter, who showed up to vote despite suffering from a rare disease, was also shared on social media.

In the constituency of Jhang, a 70-year-old beggar with disabilities cast his vote at polling station number 25. Speaking to Geo News, he said: “Because of rising inflation it has gotten difficult for us to beg.”

Similarly, in PP-228 Lodhran’s polling station 5, a 100-year-old man was seen casting his vote. He along with his grandson and son cast their votes in favour of different parties.

On polling station 25 of the aforementioned constituency, a newly married couple, dressed up in their wedding outfit, came to their respective polling stations to cast their votes.

The groom told journalists that they had left their reception event and the guests behind to fulfil their national responsibility. “If a good leader comes into power, the future of the country will be good,” he said.

The groom told journalists that they had left their reception event and the guests behind to fulfil their national responsibility. “If a good leader comes into power, the future of the country will be good,” he said.

The polling process started at 8am and will continue till 5pm. The traditional rivalry between competing parties was witnessed in today’s polling exercise, with allegations levelled between party workers and unrest at some stations.