HomeWORLDUK'Desperate' Mum of boy, 11, left in tears as neighbour blocks their...
WORLDUK

‘Desperate’ Mum of boy, 11, left in tears as neighbour blocks their garden behind BIN WALL 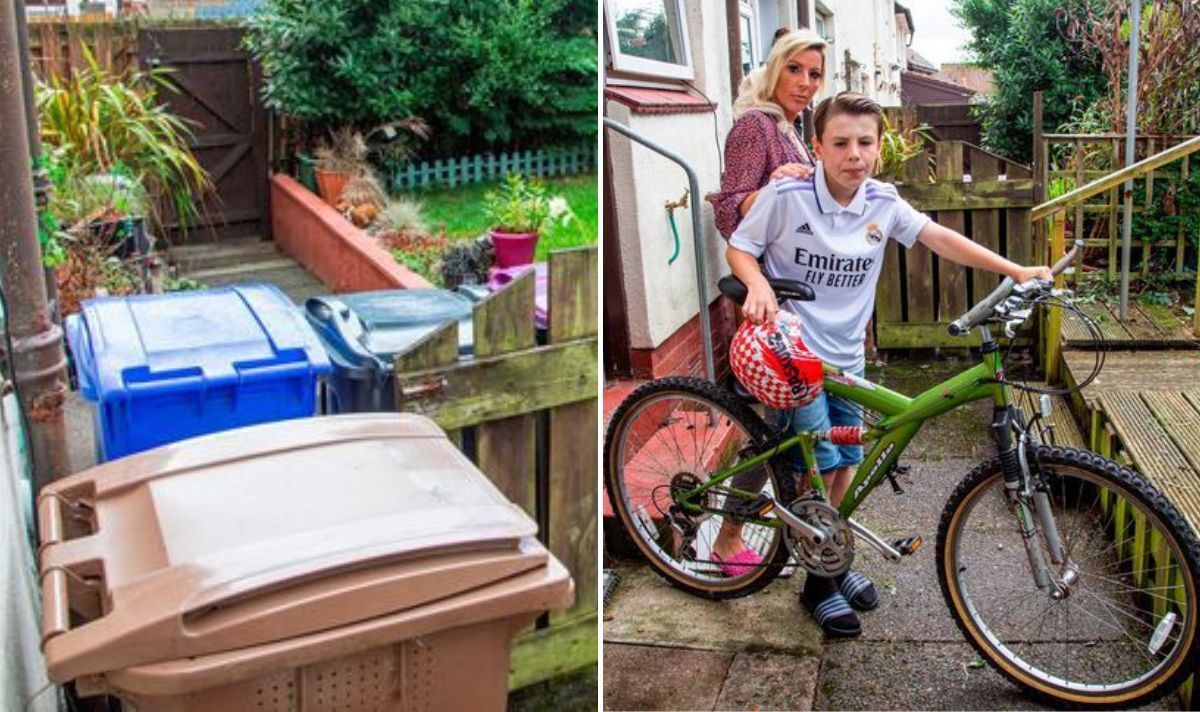 Naima Watt, 36, who lives on Annfield Glen Road in Ayr, Scotland, is involved in a row with her neighbours that has lasted over three months leaving her “shaking and in tears”. The woman claims her neighbours have blocked a fence leading to a communal pathway with a padlock, and even formed a barricade of bins on the border of her garden.

This means Ms Watt cannot access her own garden or get into her home using her back door, an issue that has caused her great frustration.

She told Ayrshire Live: “I feel like someone else is controlling my whole life. I just can’t stop shaking and I get upset every time I think about it.

“I’m desperate for it to stop, it has been going on for three months and it is just so much negative energy that I need to live next to.

“I can’t get parcels delivered, when it was Kai’s birthday his presents were late because I had to collect them from a depot. The window cleaners can’t get access, my son can’t get his bike out from the back.

“I once ended up locked out as well because the front door closed when I was out and I couldn’t get back in via the back.”

But the family’s trouble doesn’t end there, as Naima’s son, Kai, 11, who could have enjoyed the hot summer days using the garden, has lost this chance.

The exasperation builds up for Naima, who is recovering from a fall last year which left her with a dislocated shoulder and damaged nerve endings.

Her injuries meant she can’t carry her son’s bike through the house and her only option is currently blocked off due to the ongoing dispute.

Naima said: “I dislocated and fractured my shoulder and damaged nerve endings last year so I can’t lift my son’s bike through the house. He’s had to spend all summer without his bike.”

Tensions reached boiling point when Kai was left in tears after he couldn’t get his bike out to go to Bike Ability at school.

Naima said: “My son was standing waiting with his bike, but he couldn’t get out.

“My son had to go to his Bike Ability without his bike, he was so upset, he kept crying. He had to watch all his class mates enjoy their bike course.”

Naima’s landlord declined to comment when approached by Ayrshire Live, but a council spokesperson said: “We provide a service to anyone reporting cases of anti-social behaviour.

“We investigated this particular issue and there was no evidence of anti-social behaviour. We offered mediation to the parties to help them resolve their access dispute but this was declined.

“We have advised both the homeowner and the private landlord, that they will need to contact their own solicitor to resolve the issue.”