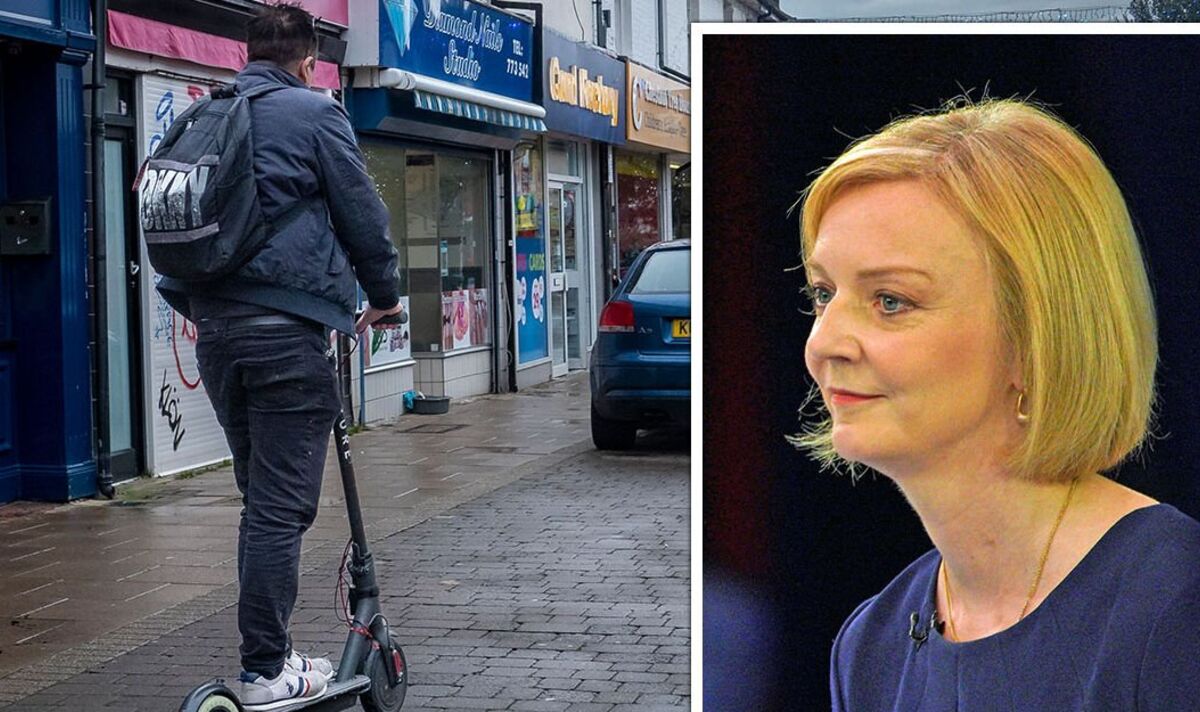 Liz Truss has been urged to follow Kent’s example by imposing a nationwide ban on e-scooters on Britain’s roads before more people are seriously injured. Campaigner Sarah Gayton also accused former Transport Secretary Grant Shapps of pursuing a “kamikaze policy” – and demanded to know when the Government would publish its e-scooter monitoring report.

Ms Gayton, Street Access Campaign Coordinator with the National Federation of the Blind of the UK, was speaking days after Kent County Council rejected an offer to extend its e-scooter trial after an incident in which an 80-year-old woman in Canterbury was knocked to the floor.

The Government’s Transport Bill includes proposals to permit all private scooters to use roads and cycle lanes in the UK. As things stand, they can only be used on private land unless they have been rented for the trials.

The NFB has been monitoring incidents to have occurred during the course of 32 trials taking place across the nation, which are due to finish on November 30. At least three people, including a 14-year-old girl, have died while riding scooters in the last year, while many others have been injured.

It will be utter chaos and carnage

“This should give a strong warning to the new Secretary of State for Transport Anne-Marie Trevelyan about how dangerous and un-regulatable e-scooters really are.

“If a few hundred e-scooters cannot be safely regulated in a place like Canterbury, what chance will every town and city have if private e-scooters become legalised as Grant Shapps, now demoted to the back benches in the House of Commons, wanted?

“It will be utter chaos and carnage, with pedestrians and the riders themselves becoming the victims of this hideous unsafe and unstable form of personal transport, which is simply not fit for purpose to be used on the public highway in Britain.”

Ms Gayton added: “In all his time in office Grant failed to publish the e-scooter monitoring report promised by his Department for so long, and you have to wonder why?

E-scooter rider on a hired vehicle in London (Image: GETTY)

“Is it that bad, that it would finally reveal to Parliament and the public the reality of his failed kamikaze e-scooter policy.”

The trials had offered a glimpse into what the future would look like if e-scooters became legal, and it was not one which was wanted by anyone who truly understood the dangers they posed to the public, Ms Gayton claimed.

She said: “This would be an opportune moment for Anne-Marie Treveylan to rethink legalising private e-scooters and to start the closure of all the other trials in England.

“Carrying on with Grant Shapp’s e-scooter trials will make the Secretary of State complicit with her predecessors reckless policy towards e-scooters and we are hoping Anne-Marie will take the opportunity to move in a different direction away from these dangerous contraptions.”

Also addressing the issue earlier this week, Jonathan White, Legal and Compliance Director at National Accident Helpline, said: “While the intention behind e-scooters was to offer an alternative to public transport and ‘greener’ option than cars, the rampant use of private e-scooters is evading public authorities and causing a sharp increase in road traffic incidents and public injuries.”

During 2020, it was reported that 196 patients arrived to the emergency department of King’s College Hospital having suffered an incident involving an e-scooter, with 30 of them having suffered limb fractures, Mr White pointed out.

He added: “Not only does the lack of regulation around private e-scooters cause concern but the silent nature of the vehicles means pedestrians crossing roads, are very vulnerable to accidents.

“We conducted an online Census survey of around 2,000 members of the public found that more than a third of Brits strongly believe e-scooters are not safe on public roads and cause traffic accidents. That said, we found that consumers would be encouraged to usee-scooters if more safety regulations were introduced.

“Given these safety concerns, it’s crucial that regulation is put in place to curb the illegal and dangerous use of private e-scooters, as well as reinforce rules for rental schemes too.”

E-scooters lined up for rent in South Kensington (Image: GETTY)

Sarah Carter, 80, broke her wrist and cheekbone, and cracked her jaw after being hit by an e-scooter being ridden on the pavement in July.

The DfT had offered to continue the trial past its current end date until May 2024 – but Kent opted instead to scale it back , with the number of e-scooters and designated areas reduced.

Cllr David Brazier, the council’s cabinet member for transport, said: “Recently an elderly lady was quite seriously injured by one being ridden on a pedestrian area which was not allowed.

“I tended to favour the trial going on, but it was quite obvious now accidents could have been worse than they were.”

A Kent County Council (KCC) spokesperson adde: “KCC and our operating partner, Bird, are continuing to collect valuable data through the Canterbury electric scooter trial to share with the Department for Transport.

E-scooter trials have been held in 32 areas in the UK (Image: GETTY)

“In recent months Bird, working to deliver this trial for KCC, has introduced enhanced safety measures including a reduction of the electric scooter speeds from 15mph to 12mph.

“Additionally, they increased Birdwatchers to patrol the city for pavement riding and changed their rider policy to introduce an immediate ban for any misdemeanour.

“KCC has decided to gradually reduce the number of vehicles in the trial, as well as the areas in which they operate, ahead of the trial finishing in Kent at the end of November.”

Participation in the various nationwide trials is entirely voluntary. Local authorities can choose to withdraw from the trials or continue with an extension to 31 May 2024.

The decision to withdraw is a matter for the local authority, and riding a privately owned e-scooter on public land or the highway remains illegal, and would be until any change in the law came into effect.