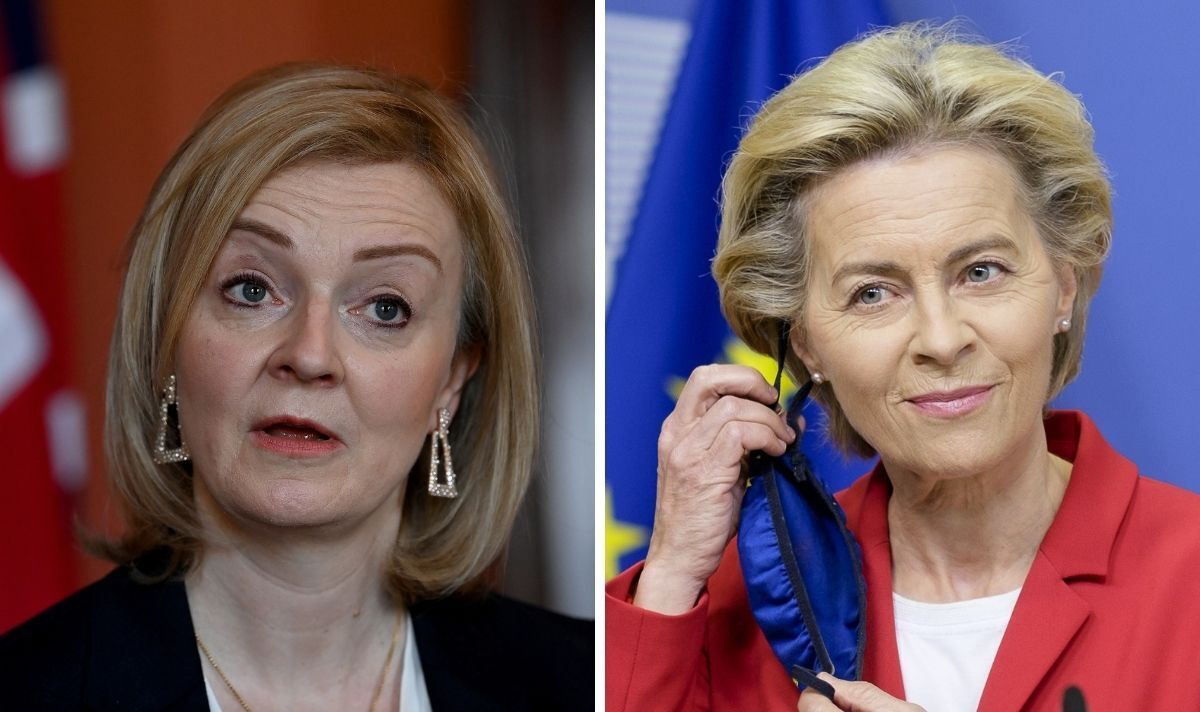 On Monday, EU leaders stressed the need for a “constructive relationship” between the EU and UK as the dispute over the Northern Ireland protocol continues. Ursula von der Leyen, the President of the European Commission, offered her congratulations to Liz Truss for becoming Prime Minister.

On Twitter, she wrote: “Congratulations Liz Truss. The EU and the UK are partners. We face many challenges together, from climate change to Russia’s invasion of Ukraine.”

The EU leader’s tweet also added: “I look forward to a constructive relationship, in full respect of our agreements.”

The protocol means that Northern Ireland is part of the EU’s single market for goods and continues to follow certain EU laws.

Boris Johnson’s Government published the Northern Ireland Protocol Bill, which would give ministers the power to change the protocol, which was part of the Brexit deal negotiated with the EU.

The EU has argued the legislation breaks international law, and Simon Coveney, Ireland’s foreign minister, has said “the last thing” both Britain and Ireland need is “a trade war between the EU and UK”.

The Democratic Unionist Party (DUP) in Northern Ireland has said it will not allow the formation of a new Government unless changes are made to the protocol.

A caretaker Government is currently in place but will be dissolved by October 28 or new elections must be called by January 19 at the latest.

In May, Sinn Fein won a historic majority for the first time in Northern Ireland’s history, and the newly appointed Prime Minister, Liz Truss has less than two months to get the new legislation through the House of Lords before triggering elections.

Michelle O’Neil, Vice President of Sinn Fein, has urged Ms Truss to “stop facilitating the DUP’s destructive and self-serving boycott of Government… end her sabre-rattling and reckless threats to break international law, and get back to the table for talks with the EU”.

Other EU leaders also offered their congratulations while hinting at the Northern Ireland protocol.

“I stand ready to work intensively and constructively with my new UK interlocutor to foster such a partnership, in full respect of our agreements.”

French President Emmanuel Macron offered congratulations to Ms Truss, and wrote: “The British people are our friends, the British nation is our ally. Let us continue working together to defend our shared interests.”

EU officials have expressed a low expectation that relations between the EU and UK will improve with the newly appointed Prime Minister.

One diplomat said: “The wish on this side is for things to improve, for there to be a more constructive relationship, but I don’t think anybody is holding their breath.”

David McAllister, a German MEP who chairs the European parliament foreign affairs committee has said the protocol is of “key importance”.

He said: “The EU is keen to have stable and positive relations with the United Kingdom based on our agreements, mutually negotiated, signed and ratified by the EU and the UK.

“Facilitating the practical implementation of the protocol on Ireland and Northern Ireland is of key importance.”