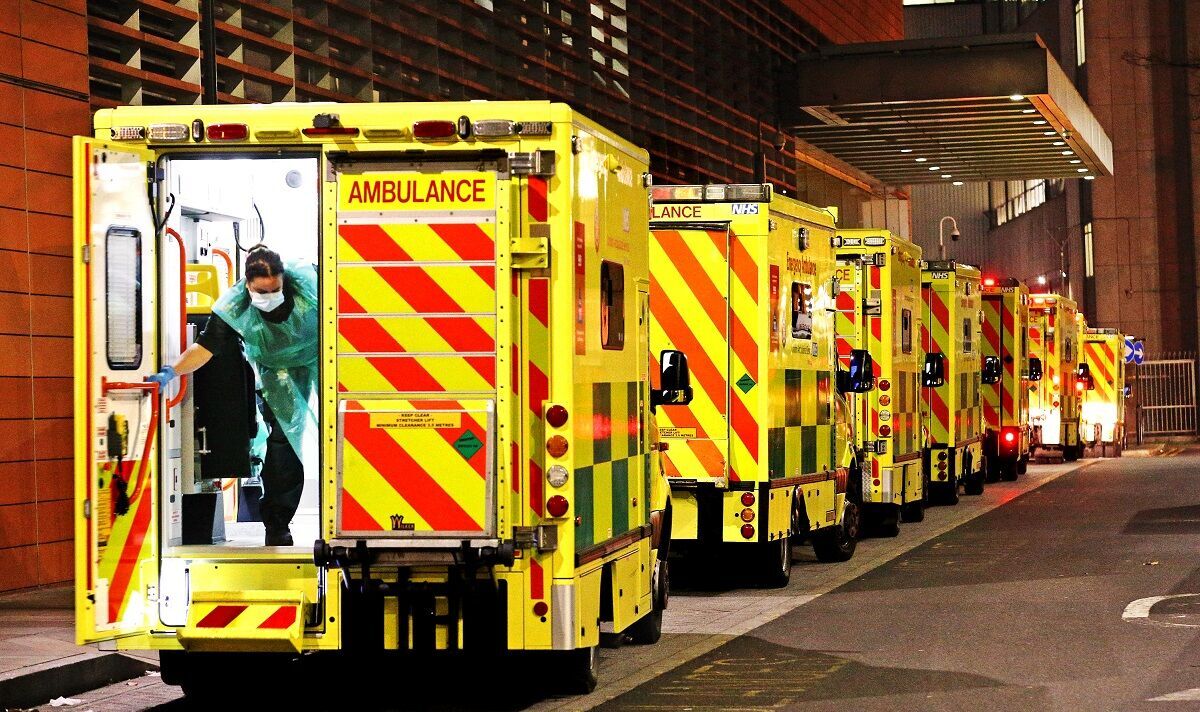 Long response times and A&E waits have severely damaged faith in NHS emergency services. Dr Katherine Henderson, president of the Royal College of Emergency Medicine, has now warned the NHS is potentially facing as big a crisis as at the start of the pandemic.

She said the public’s loss of confidence was “absolutely no surprise” and called for honesty from the next Prime Minister about the scale of the problem.

“What is the NHS tasked with doing? One of the core things is being there if somebody has an emergency.

“If you want to get to people in a way that saves lives, you need to be getting there in the times that standards were set for.”

The Savanta ComRes poll for the Daily Express found just 41 percent of 2,224 adults were confident in a timely ambulance response, while 56 percent were not.

Almost 30,000 people waited longer than 12 hours to be admitted to hospitals in England from A&E in July, the highest on record.

The average response time for ambulances dealing with life-threatening incidents was nine minutes and 35 seconds, the joint longest since records began in 2017.

And patients waited 59 minutes and seven seconds for incidents such as strokes, epilepsy and burns, against a target of 18 minutes.

Recent cases include a 90-year-old woman who waited 40 hours for an ambulance after a serious fall, then a further 20 hours outside Royal Cornwall Hospital.

Meanwhile, James Anderson’s family was told there would be a seven-hour wait after his grandson was thrown from his bicycle while not wearing a helmet and suffered a nasty gash on his forehead.

Almost 30,000 people waited longer than 12 hours to be admitted to hospitals in England from A&E (Image: Yui Mok/PA)

Following the estimate from 999, his father borrowed a van and drove two miles to the nearest hospital. The youngster, seven, was later blue-lighted to another Manchester hospital and received 56 stitches.

James, 55, of Burnley, said: “It’s not the taxpayer’s fault or the NHS’s fault, the nurses, doctors or ambulance staff.

“It’s down to the Government. Their job is to fund the NHS so we can have the services we rely on.”

Dr Henderson said delays were often distressing and gave the example of elderly patients left on the floor for hours who suffer the indignity of urinating before an ambulance arrives.

She warned there was no reason to think pressure would drop – and it will intensify in winter when Covid cases are likely to rise and a bad flu season may hit.

Dr Henderson said lives were being lost due to the strain and staff felt “a sense of moral injury” that they cannot deliver the quality of care they want to.

She said the most important thing the new Prime Minister could do immediately was be honest about “how dangerous the situation is at the moment”.

“That means not always just touting that X number more people have come off the waiting list and the number of outpatient appointments,” she added.

The top medic also declared that the NHS’s winter plan had “no teeth”. She said: “Where is the emergency workforce for this winter so that we can open up every social care bed and get patients out of hospital?

“You can’t train up a doctor or nurse between now and winter but you could train healthcare assistants to work with qualified people in nursing homes or community facilities, or even in patients’ own homes.

“You’re taking a little bit more risk, it might not be what you would ideally do, but you can get somebody out of hospital.”

Dr Henderson suggested relatives could even be paid to care for loved ones.

She said: “We’re in as big a crisis, you could argue, as the beginning of the pandemic.

There, we all pulled together to get a workforce to vaccinate.

“Should we not be thinking like that? Should we be paying relatives to be with people so they could get a bit of training?

“I don’t know if that’s the right idea but we need to explore something more radical than just: ‘It would be nice not to have patients in the back of ambulances’.”

A Department of Health and Social Care spokesperson said: “We absolutely recognise the pressures ambulance services are facing – with call handlers answering nearly 950,000 calls nationwide in July alone – and we are taking action to support them.

“This includes the NHS investing £150 million to help ambulance services meet pressures and £20 million this year to upgrade the ambulance fleet, while we have also grown the ambulance and support staff workforce by almost 40 percent since April 2010.

“We continue to work closely with the NHS to improve care for patients, tackle delayed discharge and speed up handovers to get ambulances back on the road.”

”It feels like we’re just shouting at the clouds”

Delays in reaching patients mean minor injuries can become potentially life-changing problems, he said. He gave the example of an elderly lady who had fallen out of bed and suffered a cut down her arm.

If an ambulance had arrived within an hour, the wound could have been stitched up and the patient sent for a quick check-up at the hospital. Instead, it took four to five hours for Aaron and his colleagues to reach her, by which time well-meaning attempts by friends to bandage the wound had made it worse.

The skin had started to die and needed to be cut off.

Aaron, 31, said: “She has now got a big open wound on her arm, it’s probably going to become infected.

“These simple things that would normally be easily managed are becoming big problems because of the delays.

“It’s embarrassing to turn up sometimes when you’re knocking on the door at 4am for a patient who called the morning before. You feel like you’re letting everyone down.”

Aaron moved to the UK from New Zealand three years ago and is a representative for the GMB Union in London.

He said handover delays at hospitals mean waiting with patients for up to seven hours is considered normal and some crews are only able to help one or two patients during a shift.

He added: “When I came into the NHS, I thought 20 minutes waiting at a hospital was a long time. Now I think: ‘That one only took an hour to handover, excellent.’

“Staff waiting seven or eight hours is not even news to us anymore.” The delays mean ambulance staff are having to care for patients over longer periods of time than they are equipped for.

Aaron added: “We’re stacking patients up in hallways at the hospital. They’re having breakfast, lunch and dinner in a hallway before they’ve even seen a doctor.”

Morale among staff is low and many people are suffering from mental health issues due to the stress, Aaron said.

He added: “It feels like we’re just shouting at the clouds. We’ve gone over and over to the Government, to the unions, to anyone who will listen, about what’s happening but nothing has changed.”

Prime Minister, as you step into your new role I am sure you are aware of the visible and sustained issues that face the ambulance sector and the devastating effect this has on both the public and the paramedic profession, as well as all those supporting the delivery of care and services, including call handlers and dispatchers.

999 calls to the ambulance service are taking longer to answer and the volume of the most life-threatening calls has risen, accounting for more than 11.5 percent of all calls.

Response times to category two calls such as stroke and heart attacks are now an average of nearly two hours when the national standard is 18 minutes.

Patients are coming to harm as a result of this and action must be a priority to reduce and prevent this continuing through winter and beyond.

If no action is taken, we are likely to see an even higher attrition rate for paramedics due to low pay rises and the moral injury of harm coming to patients.

Like others, paramedics have worked through this pandemic in all settings with great compassion and care for those they treat in primary and urgent care, secondary care, the independent and third sector, in the military, in education settings and, of course, in the ambulance sector.

Please ensure that care is reciprocated to those who continue to advocate for the public they serve.