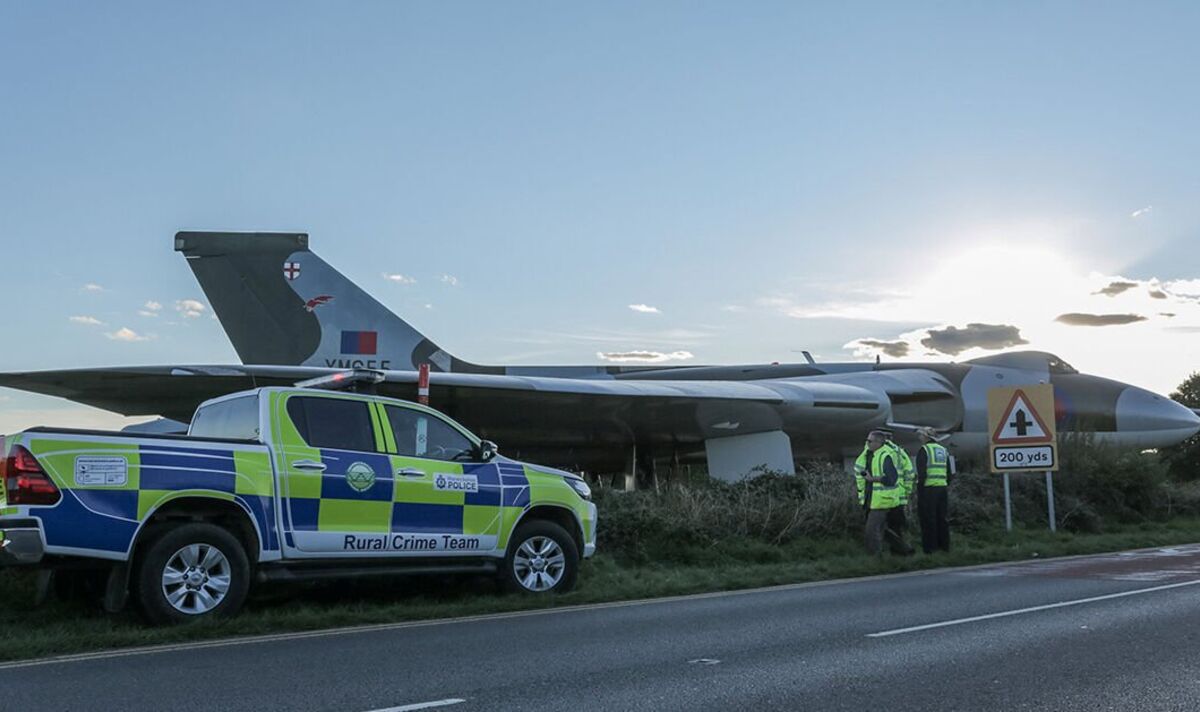 A Vulcan bomber came within inches of ploughing into cars after attempting a “high-speed taxi test”.

Dramatic video and photos show the historic and iconic aircraft grounded in a field beside a rural road near Stratford-upon-Avon, Warwickshire, after it had slipped off the runway at nearby Wellesbourne Airfield.

The bomber’s nose is just feet from cars in the images, taken minutes after the drama unfolded on Friday morning.

Other pictures seen by Coventry Live show plane tyre marks across the field after the plane steered away from the runway.

The road was closed while the XM655 Vulcan bomber was recovered.

Now the aircraft has been recovered thanks to the efforts of a veritable army of volunteers. The Vulcan, which draws crowds of visitors, is looked after by the XM655 Maintenance and Preservation Society at the airfield.

The society has since mounted a huge recovery operation and posted video footage on YouTube detailing how it was done, which you can watch above. It also posted an update on its website entitled “XM655 is back on the pan”.

It said: “After a very long and very hard day today, we are delighted to report that XM655 is back on her pan at Wellesbourne.”

It added: “We want to say a massive thanks to everyone who helped us with this huge task, including Bob Jackson and VTTS for the loan of their rear towing bridle, Wixey Transport, especially Matt and Richard, who have moved massive amounts of soil around to make it possible, and all the heavy recovery guys from Tech Trucks, Mayo’s Roadside Assistance, CCG Commercials Ltd and RPM Aviation. Without them, we couldn’t possibly have done it.

“We must also thank all the XM655MaPS volunteers who worked tirelessly all day to get the old girl back onto solid ground. They went home after a long day very tired, but they can be justifiably proud of what they have achieved.”

The Vulcan is a popular attraction at Wellesbourne Airfield. Avro Vulcan XM655 was the third from last of the Vulcan bombers produced for the Royal Air Force, being delivered in late 1964, and was part of the UK’s nuclear deterrent force throughout the 1960s and 1970s.

It is now owned by Wellesbourne Airfield, and is looked after by 655 Maintenance and Preservation Society (655MaPS) which is a volunteer organisation of Vulcan enthusiasts. XM655 is one of the few Vulcans remaining in ground running condition, the only one with the most powerful of the engine variants (Bristol Olympus 301s) and 655MaPS aim to keep it running for as long as possible.

The aircraft systems, which are powered up and exercised regularly, are available for demonstration to booked parties of visitors, engine ground runs are carried out several times every year, and “Fast Taxi”.

“It’s been five years since the last high-speed taxi, and there were certainly a few people in the café and on the airfield pleased to see her running. She may have been brilliant, but operating on a 2,000ft runway might not have been great for my blood pressure.”