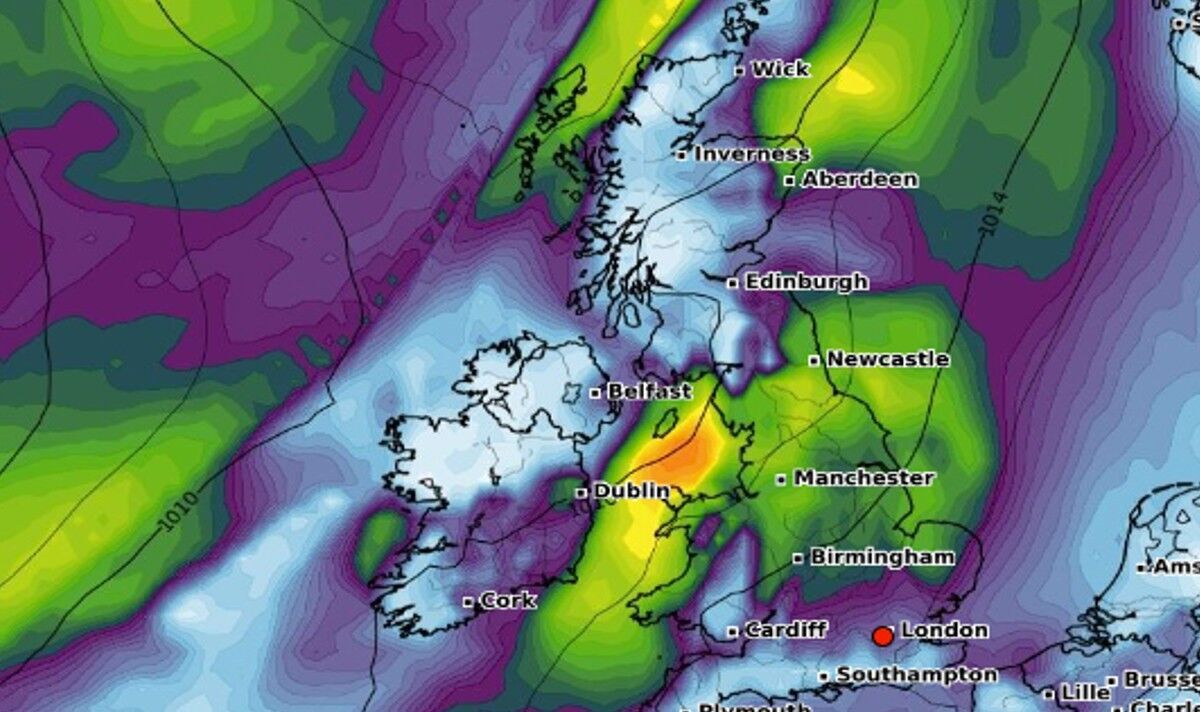 The yellow warning for rain is in effect from midnight to 11am on Monday, and affects north west England and Wales, where millions of Britons reside. Regions like Manchester, Merseyside and Blackpool are covered by the heavy rain warning and could see up to 80mm fall at the start of the week.

In the Met Office’s warning, they said “flooding of a few homes and businesses is possible” where rain is hardest, as well as “some interruption to power supplies and other services possible”.

It added: “Following some rain during Sunday afternoon and evening another band of heavy rain is likely across parts of north Wales and into northern England from early on Monday morning.

“This will be slow moving for a time with the potential for widely 20-40 mm and some spots of 60-80 mm, these mostly for parts of northwest Wales.

“With much of this rain falling in 3 to 6 hours some disruption is likely, particularly to travel during Monday morning.”

Met Office forecaster Greg Dewhurst said rain localised over Northern Ireland will “push its way eastwards across the north of the UK through Sunday evening”.

He told the Mirror: “This rain will continue to push east and south as we head through to Monday, sunshine and showers following across Northern Ireland and Scotland.

“The south and south east of the UK still holding on to some warm and sunny weather. Fresher for everyone into Tuesday as that rain clears away to the south east.

“But we will see the return of sunshine, particularly across the north and the west. Temperatures generally in the high teens to low 20s.”

The Environment Agency also issued a flood warning and 11 flood alerts across the UK, with five alerts in the north west of England.

The warning is in effect at Wye Estuary at Brockweir, and has been issued as a result of high spring tides.

Tides are next at their highest between 8pm and 10pm on Sunday, with the Government’s flood service adding: “Flooding to properties, roads and farmland is possible at these times, however conditions may apply two to four hours either side of the high tide.

“The current series of high tides will continue for the next 2 days, but will be starting to reduce after this evening’s high tide.’

Terry Scholey, a meteorologist at Netweather.tv, wrote for the agency’s website that sunny spells on Sunday will “be brief for the West and North, with further outbreaks of rain moving into Northern Ireland and the far West later”.

However, he wrote: “In complete contrast, southern England, East Anglia and much of the Midlands are fine and dry on Monday and also become very warm in another late resurgence of summer.

“But by Tuesday or mid-week, the cooler weather in the North should have finally reached southern England, perhaps preceded by a few perhaps sharp showers.”